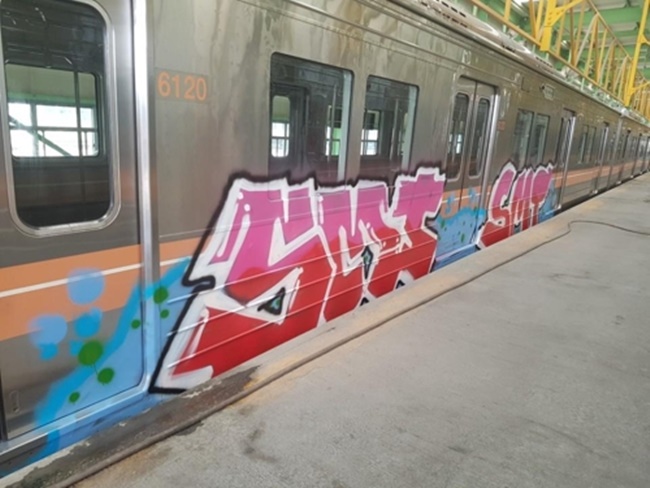 An appeal filed by the graffitists, who are also brothers, was denied by the Seoul Eastern District Court, which means the two face four months in jail for trespassing and property damage.(Image: Seoul Metro)

SEOUL, Nov. 14 (Korea Bizwire) — Two British graffitists have been sentenced to four months in jail after painting letters on subway trains in Seoul.

An appeal filed by the graffitists, who are also brothers, was denied by the Seoul Eastern District Court, which means the two face four months in jail for trespassing and property damage.

The charges came after the two graffitists in their 20s broke into a vehicle depot and painted the English letters ‘SMTS and ‘SMT’ onto subway trains on July 11 and 12.

Though the two argued the letters ‘SMT’ stood for ‘So Much Trouble’ in court, sources from the international media and a court ruling show the letters refer to the name of a Manchester-based graffiti group the brothers are part of.

The graffiti duo was set to leave South Korea on the July 13 soon after vandalizing the trains, but things didn’t go to plan when they were detained by police at their guesthouse.

During the first trial, the judge said train graffiti not only caused financial damage to the train operator, but also caused disruption to the running of trains, branding the incident a clear criminal act and sentencing the vandals to four months in jail.

The court heard during the appeal trial that the two have a criminal record for similar charges, and dismissed an appeal by the defendants, upholding the lower court’s charges convictions of trespassing and property damage.

Members of graffiti crew SMT have caused tens of millions of won of damage to trains around the U.K. and faced jail terms in the past.

Both of the vandals facing jail time in South Korea were found to have been given jail sentences in the U.K.

The high-profile group SMT Crew was founded by Kieron Cummings, who was once involved in photography work with designers like Vivienne Westwood, and has been previously jailed in the U.K.