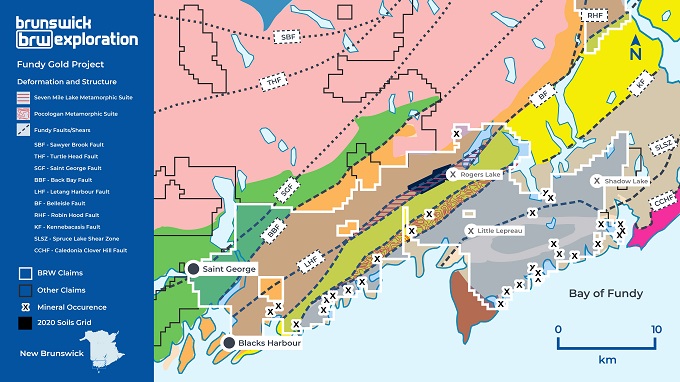 Mr. Killian Charles, President of BRW, commented: “These initial results are very encouraging and support our conviction that the Fundy Gold Project is highly prospective for precious metal endowment. The area has seen no systematic exploration in the past, and since staking the 53,000-hectare land package in 2020, magnetic, resistivity, gravity and Lidar surveys have been reprocessed in addition to compiling all available till, soil and stream sediment data. Combined with initial prospecting, BRW has identified numerous mineralized areas within multiple mylonitic fault bounded corridors. We are very excited about this project and plan to aggressively pursue our prospecting efforts over the coming months along the soil anomalies and faulted corridors.”

The SML mylonite continues beyond the boundaries of the grid and extends for approximately 18 kilometers. It is fault bounded along the southern contact by the district scale Belleisle Fault. Importantly, quaternary geological mapping by the government describes the till beneath the soil as a thin veneer with an average thickness of less than 1 meter.

Other mineralized structures are thought to exist outside of the main zone of deformation currently covered by the soil sampling. To date, anomalous samples are positioned in both magnetic highs and lows as well as Lidar lineaments. Follow-up work is planned for Q2 and Q3 2021.

The company will continue to aggressively prospect and conduct soil surveys along major deformation and fault corridors including the Seven Mile Lake Metamorphic Suite and the Pocologan Metamorphic Suite (PMS) in the spring (See Figure 1). The PMS is 25 kilometers in strike and is considered to be a highly prospective mylonitic deformation zone with very little history of exploration. BRW will also conduct a property wide till survey at roughly 500m spacing along and near all available roadways and bush roads. Depending on the results of the soil programs, till survey and follow up prospecting, the company expects to conduct a trenching and/or drilling program in Q4 2021.

The Project is located 15 minutes West from the city of Saint John and extends roughly 45 kilometres to the city of Saint George. The area is located within the Fundy Shear Zone that borders the Gander and Avalon Geological Terranes, the latter having yielded approximately 6.0 Moz gold production in the Carolina Slate Belt in the USA. The newly acquired, 53,000-hectare land package has been poorly explored, most work being geological in nature with limited surface prospecting.

The Project is considered highly prospective as it includes several vein gold-polymetallic showings within the broad Fundy Shear Zone. This major structure cuts across all of southern New Brunswick and comprises multiple deep-rooted faults that expose panels of sedimentary, volcanic and granitoid rocks, as well as mylonites, juxtaposed during multiple orogenic events over an extensive time frame.

The scientific and technical information contained in this press release has been reviewed and approved by Mr. Charles Kodors, P. Geo, Manager New Brunswick, a licensed professional geologist in New Brunswick.

The 16,200 ppb sample didn’t have enough material to conduct a gravimetrical finish; fire assay checks with AA finish were conducted on the remaining material which returned values of up to 1030 ppb. Some samples contained pulps that were less than 30 grams due to the granitic and coarse-grained composition of the B-Horizon soil.

The Company, formerly Komet Resources Inc., is part of the Osisko Group of companies and is a Montreal-based mineral exploration venture listed on the TSX-V under symbol BRW. The Company has sold its former African assets and is now focused on exploration and development of gold and base metal properties in Eastern Canada. Current projects include gold-polymetallic vein systems in Southern New Brunswick (Fundy Gold Project), base metals VMS in the Bathurst Camp in northern New Brunswick and in the Chibougamau region of Quebec (Waconichi), and the new Lac Édouard nickel-copper project in Québec.

Infographics accompanying this announcement are available at: