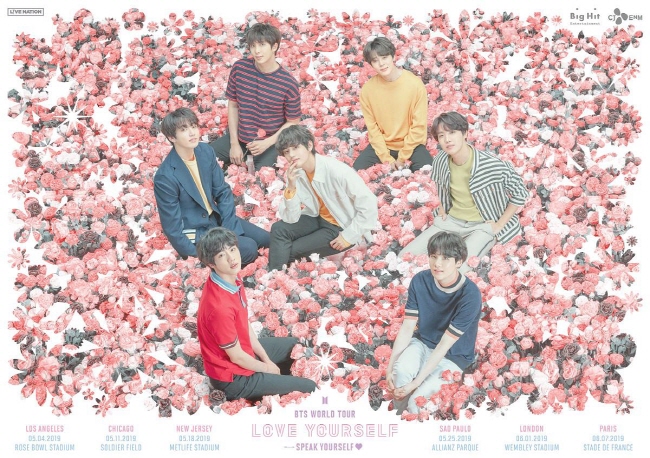 SEOUL, Feb. 20 (Korea Bizwire) — K-pop boy band BTS will carry out another concert tour of major cities in the United States, Europe and Japan starting in May, the band’s management agency announced Wednesday.

The “Love Yourself: Speak Yourself” tour, which came after BTS’ successful, wider world tour last year, will bring the septet again to eight cities — Los Angeles, Chicago, East Rutherford, Sao Paulo, London, Paris, Osaka and Shizuoka — starting in May. A total of 10 concerts will be held in the eight cities, according to Big Hit Entertainment.

The new tour, named after the theme of BTS’ public address during the United Nations General Assembly’s UNICEF meeting last September, is an add-on to the band’s “Love Yourself” world tour, which kicked off in Seoul in August.

Along with the announcement, Big Hit released new posters with the tour’s timetable.

According to the posters, the tour will begin at Los Angeles’ Rose Bowl Stadium on May 4, followed by stops at Chicago’s Soldier Field on May 11, the MetLife Stadium in East Rutherford, New Jersey, on May 18, Sao Paulo’s Allianz Parque on May 25, London’s Wembley Stadium on June 1 and Paris’ Stade de France on June 7.

Then BTS will move to Japan’s Osaka where they will perform from July 6-7 at Yanmar Stadium Nagai to be followed by the final concerts from July 13-14 at Shizuoka’s Shizuoka Stadium Ecopa.

The tour will add to the fervor of BTS’ sold-out “Love Yourself” world tour, which is in course of hitting some 20 cities, including most famously New York where the band performed at the Citi Field stadium.

“BTS will hold all the concerts of this latest tour at stadiums,” Big Hit said. “They set a record as a band capable of a global stadium tour.”