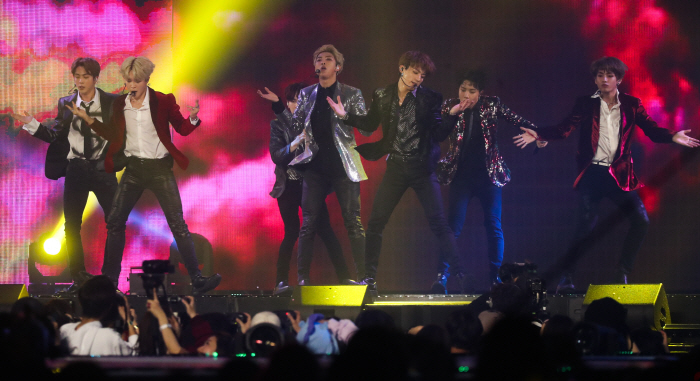 SEOUL, Nov. 9 (Korea Bizwire) — A Japanese television station has canceled an appearance by the massively popular K-pop group BTS citing controversy over a T-shirt with an image of an atomic bomb that a member wore last year to celebrate Korea’s liberation from Japan after World War II.

“BTS won’t be able to appear on TV Asahi’s ‘Music Station’ program scheduled for Nov. 9,” Big Hit Entertainment said in a notice posted on the group’s official website for Japanese fans Thursday. “We’re sorry for this decision, but (BTS) will be back to you fans with better music and performances.”

TV Asahi also reported the decision the same day, saying, “The design of a T-shirt worn by a BTS member has caused a controversy, which was reported by some news media.

The station then said it talked with the band’s record label over the reason he wore the shirt and ultimately decided to cancel its appearance.

Last month, a Japanese newspaper criticized the group for “doing anti-Japanese activities,” citing the shirt worn by member Jimin and a SNS message posted by leader RM in celebration of the Aug. 15 Korean Liberation Day.

The T-shirt had such English words as “Patriotism,” “Our History,” “Liberation” and “Korea” among black-and-white photos of a rising mushroom cloud created by an atomic bomb and of Koreans celebrating the end of Japanese colonial rule of Korea in 1945.

RM wrote on Twitter on the Korean Liberation anniversary in 2013 that: “There is no future for a nation who forgets history. I thank Korean independence fighters. Hurray for the independence of Korea!”

BTS accordingly canceled its plan to leave for Japan on Thursday night for the TV appearance. The group will hold its Japanese dome tour under the title “Love Yourself” as scheduled, starting in Tokyo on Nov. 13-14.