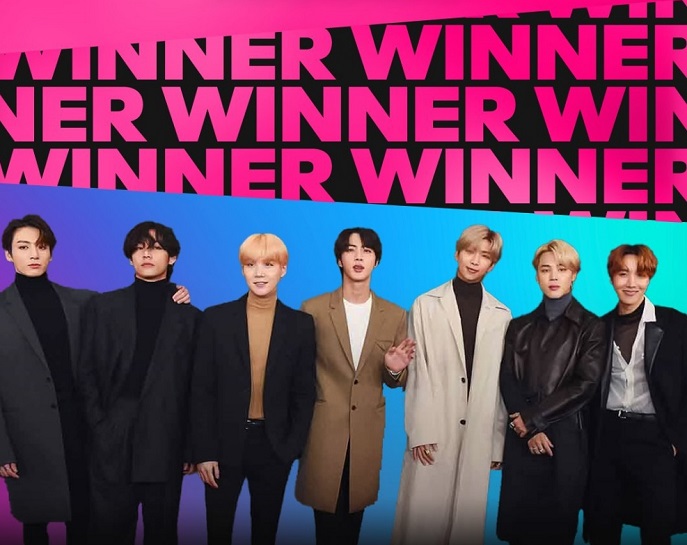 This image provided by People’s Choice Awards describes South Korean pop act BTS as the winner in the group of 2021 category in this year’s event.

SEOUL, Dec. 8 (Korea Bizwire) — K-pop superband BTS has won three prizes at the 2021 People’s Choice Awards, the latest in a series of honors it took home from the United States this year.

The South Korean group won the group of 2021 and both the song and the music video of 2021 for its megahit “Butter” at the annual ceremony held in person in Santa Monica, California, Tuesday (U.S. time).

The septet, in particular, beat out big name stars, such as Coldplay, Dan + Shay, Jonas Brothers and Maroon 5, to win in the group of the 2021 category.

Last year, BTS took home four titles — the group, the song, the album and the music video of the year at the awards show that recognizes people in the show business, including film, TV shows and pop music based on online votes.

“We’re so happy because all these awards mean that people have recognized our efforts. We’re so grateful that it is difficult to describe how we feel in words. Since the Armies were right behind us, we were able to have come this far,” the group said through its agency Big Hit Music after accepting the prizes.

“Thank you for loving ‘Butter’ a lot. We wanted to make people going through difficult times happy (through this song).”

Released in May, the second English-language song from the group stayed atop the Billboard Hot 100 main singles chart for 10 non-consecutive weeks.

BTS became the first Asian act to receive the top honor of the artist of the year at this year’s American Music Awards for the song last month.

The summery song also earned the group the record of the year during the annual Hitmakers event by U.S. entertainment magazine Variety last week.