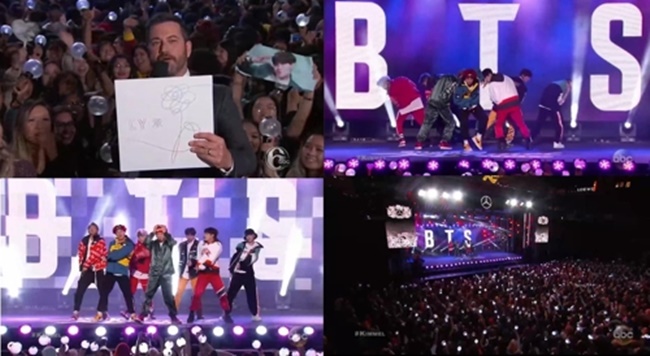 SEOUL, Nov. 30 (Korea Bizwire) – K-pop sensation BTS has rocked a crowd of some 1,000 ardent fans at a mini concert in the U.S. while filming its segment for late-night talk show ”Jimmy Kimmel Live!,” according to the program Thursday.

A 20-minute clip of the group performing four songs — “Go Go,” “Save Me,” “I Need U” and “Fire” — in front of a crowd of some 1,000 fans in Los Angeles was made available on the program’s YouTube channel.

According to Billboard, the showcase was filmed as part of the Live! concert series sponsored by Mercedes-Benz. The performance of the group’s latest song “Mic Drop Remix” was aired during the program’s regular broadcast.

BTS’ television appearance is the latest in the group’s recent media blitz in America, which began with its performance at the American Music Awards earlier this month. The band has appeared on daytime talk program “The Ellen DeGeneres Show” this week and also has a segment pre-recorded forthe “The Late Late Show With James Corden.”

The group is scheduled to perform at Mnet Asian Music Awards in Hong Kong on Friday and hold a three-day concert at Gocheok Sky Dome in Seoul starting Dec. 8.