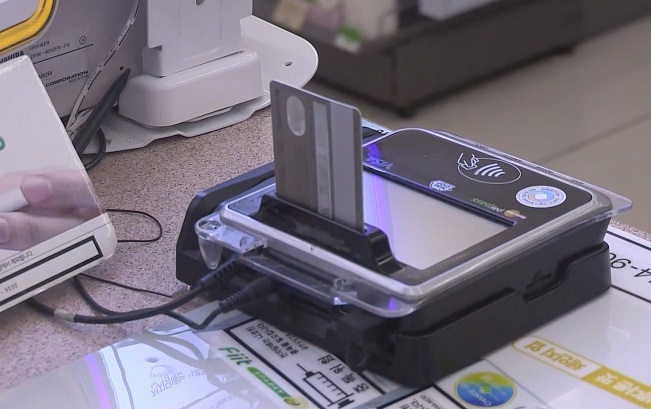 The image, provided by Yonhap News TV, shows a payment with a credit card.

SEOUL, Nov. 3 (Korea Bizwire) — Payments made with cards in South Korea grew at a slower pace in the first nine months of the year from a year earlier as consumer spending remained tepid amid the new coronavirus outbreak, central bank data showed Tuesday.

Spending made with credit, debit and prepaid cards reached a daily average of 2.5 trillion won (US$2.2 billion) in the January-September period, up 1.4 percent from a year earlier, according to the Bank of Korea (BOK).

The growth rate slowed from a 5.3 percent on-year gain in the first nine months of 2019.

The central bank said card spending only marginally rose this year as people refrained from visiting offline stores amid the COVID-19 pandemic, dealing a blow to consumer spending.

By month, card spending dropped in March and April when the country was gripped by the first wave of the COVID-19 pandemic, but it has rebounded since May.

In August, payments made with cards slowed from the previous month, hit by the fallout of a resurgence in new coronavirus cases. Card spending recovered again in September.

South Korea imposed tougher social distancing measures across the nation in late August for about two months to contain the fast spread of virus cases.

The use of prepaid cards jumped 770.6 percent in the cited period, largely because of state allowances and emergency relief aids provided in such a form, the BOK said.

Earlier this year, the country provided up to 1 million won to every household here to help spur spending in Asia’s fourth-largest economy.

By method, contact-free card spending gained 17 percent on-year to a daily average of 800 billion won, while card payments made during face-to-face transactions fell 3.7 percent to 1.4 trillion won per day, it said.