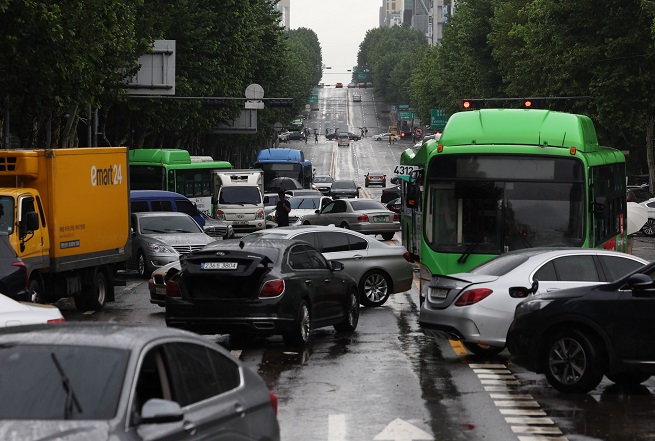 Cars abandoned by motorists amid heavy downpours and ensuing flash floods sit unattended on a road near Daechi Station in southern Seoul on Aug. 9, 2022. (Yonhap)

SEOUL, Aug. 9 (Korea Bizwire) — A disaster movie-like scene unfolded in southern Seoul on Tuesday morning, as a large number of cars abandoned the previous night by flood-stricken motorists were left unattended on streets.

The heaviest rainfall in 80 years battered the Seoul metropolitan area this week, causing flash flooding and submerging many roads and buildings in southern Seoul, in particular.

Many motorists stranded in rising flood waters ditched their vehicles in the middle of roads between late Monday morning and early Tuesday morning.

“I was stunned to see many passenger cars remained abandoned on roads in various places in southern Seoul Tuesday morning,” said a 58-year-old taxi driver, adding he had never seen such a sight before during his career.

On a road between the Seoul Arts Center and Sadang Station in southern Seoul, for instance, three of four lanes were blocked by abandoned vehicles, forcing car commuters to crawl along for hours.

Photos of submerged cars left neglected on roads near Gangnam Station, Banpo-dong and other southern Seoul locations have been posted on social media, with almost all comments saying they were forced to leave behind their cars due to sudden flooding.

Police said the situation was getting better later in the day, as motorists were individually hiring towing services to remove their cars from the roads.