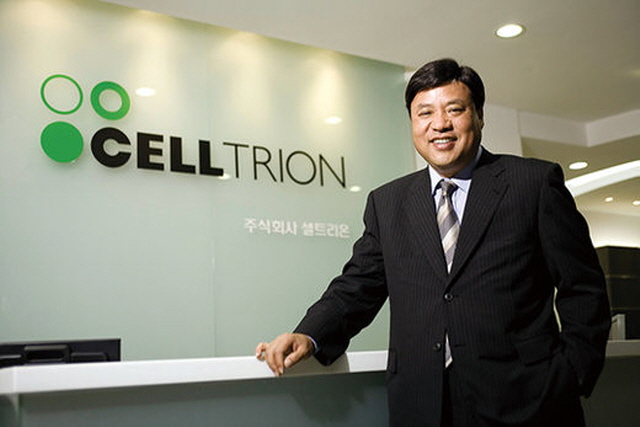 SEOUL, Jan. 8 (Korea Bizwire) — The head of a biotech venture firm has emerged as the fourth-richest man in stock holdings in South Korea, industry data showed Sunday, amid a bio venture boom in Asia’s fourth-biggest economy.

The value of stocks held by Seo Jung-jin, chairman of biopharmaceutical firm Celltrion Inc., rose to 5.39 trillion won (US$5.06 billion) as of Friday, according to market researcher Chaebol.com.

The jump in Seo’s stock assets came on the listing of Celltrion Healthcare and the planned move of Celltrion to the main KOSPI stock market from the tech-laden KOSDAQ market next month.

On Friday, Celltrion closed at 266,900 won (US$250) on the secondary KOSDAQ market, with its market cap reaching 32.7 trillion won. The figure hovers above that of POSCO, South Korea’s top steelmaker, which is in the fourth spot on the main bourse at 32 trillion won.

Market watchers said that in the near future the market cap of Celltrion may surpass that of No. 1 carmaker Hyundai Motor, which currently occupies the third spot of the main bourse with 32.8 trillion won.

They cited the release of Herzuma by Celltrion in the first quarter, and the expected approval for Truxima and Herzuma in the North American market in the second quarter.

Herzuma, a biosimilar, is to treat breast cancer and another biosimilar Truxima is to treat patients with non-Hodgkin’s lymphoma, chronic lymphocytic leukemia and rheumatoid arthritis.

The record rally of the KOSDAQ market has produced as many as 67 people holding stocks worth over 100 billion won as of Friday.

The figure represents a whopping 63.4 percent rise from 41 a year earlier.

Foreign investors poured more than a net 3.13 trillion won into the KOSDAQ market last year to spearhead the record rally of the secondary bourse in the largest annual tally since the KOSDAQ bourse was launched in 1996.

Foreign ownership in the KOSDAQ market accounted for a 10-year high of 13.2 percent in terms of total market capitalization last year.

Biopharmaceutical firm Celltrion Inc., the top cap of the secondary KOSDAQ market, and the biotech company SillaJen Inc. were their top picks, with bio stocks having powered the strong run of the KOSDAQ market last year.