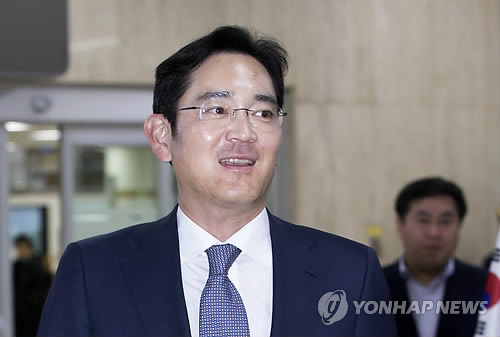 If the merger deal is completed as scheduled in September, Samsung Electronics Vice Chairman and heir apparent Lee Jae-yong, 47, will become the biggest shareholder of the new entity with an estimated 16.5 percent stake, which would help him control the group via a complex web of cross shareholdings. (image: Yonhap)

SEOUL, June 2 (Korea Bizwire) – South Korea’s top family-controlled conglomerates, known here as chaebol, have recently announced plans to merge their key units, in what is widely seen as a play to simplify their governance structures and help pave the way for power transfers.

Betting such moves will trigger a bull run for the affected companies, investors here have scurried to load up on their shares, sending their stock prices through the roof.

Despite their positive impact on share prices, market watchers are skeptical that the envisioned mergers will be able to create “synergy effects” as the companies engage in almost completely different business areas.

On May 26, Cheil Industries, the fashion business and entertainment park unit and virtual holding firm of Samsung, unveiled plans to merge with Samsung C&T, the group’s construction and trading arm. Their shares rose by the daily price limit of 15 percent on the day and extended rallies the next day.

Although the market didn’t have much faith in the “synergy effect” that Samsung said was behind the deal, investors scrambled to buy their shares, believing that the merger is aimed at paving the way for the ailing chairman’s only son to tighten his grip on the nation’s largest conglomerate.

If the merger deal is completed as scheduled in September, Samsung Electronics Vice Chairman and heir apparent Lee Jae-yong, 47, will become the biggest shareholder of the new entity with an estimated 16.5 percent stake, which would help him control the group via a complex web of cross shareholdings.

His father and incumbent Chairman Lee Kun-hee has been hospitalized following a heart attack a year ago.

Market watchers said the merger of the two companies will help streamline Samsung’s complex governance structure that has long perplexed investors, and they expect more restructuring moves later this year.

“A holding company structure could enhance the market value as it gives large shareholders a bigger say in management, while an operating company can be evaluated for its core business,” said Kim Kwang-hyun, a researcher at Yuanta Securities Korea.

Speculation has been rife that Cheil Industries, about 42 percent owned by the Lee family, may turn into a holding company through which the patriarch’s three children would control Samsung Group, which has 67 affiliates ranging from electronics and insurance to engineering and finance.

Samsung has denied such a possibility, citing enormous expenses. In South Korea, a holding company is required to own at least 30 percent of listed subsidiaries.

On the other hand, corporate critics question the efficiency of the merger between firms in the seemingly unrelated industry, saying the biggest beneficiary from the US$8 billion deal is the Lee family who may clinch extra cash needed for billions of dollars of inheritance taxes and tighten their control over the group.

“Samsung’s latest merger move has raised attention to the corporate governance structure in other business groups as well,” said Kim Sang-jo, an economics professor at Hansung University and the chairman of Solidarity for Economic Reform. “Investors should keep an eye on the key affiliates as the group reshuffles are moving in a way to maximize the interests of major stakeholders.”

Samsung’s proposed merger is the latest in a series of restructuring moves by the family-controlled conglomerates, which have come under growing pressure to simplify their interlocking share structure that has allowed the owner family to control business empires with a handful of stakes.

As part of efforts to rein in their enormous power in the national economy, the administration of President Park Geun-hye enforced a new law in June 2014, which bans cross-shareholding investments among conglomerate subsidiaries.

Under the law, subsidiaries of a conglomerate with total assets of more than 5 trillion won (US$4.8 billion) are prohibited from making new cross-shareholdings or circular investments among themselves.

The government has also strengthened regulations on internal trading among their subsidiaries, which have been accused of stifling growth of the nation’s small and medium enterprises. Last year, the amount of internal trading between firms affiliated with the nation’s top 10 groups hit a record high of 155.6 trillion won, according to corporate tracker Chaebul.com.

In April, SK C&C, an IT service unit of No. 3 conglomerate SK Group, said it will merge with SK Holdings, a move widely believed to help the group Chairman Chey Tae-won cement his reign over the chaebol.

The deal came as SK Group, whose business portfolio ranges from telecom to energy, is seeking to reorganize its business structure, in which SK C&C stands at the top of group management through its stake in SK Holdings.

Chey, who has been serving a four-year jail term since January 2013 on embezzlement charges, currently holds a 32.9 percent stake in SK C&C, which in turn owns 31.8 percent of SK Holdings, allowing him to virtually control the group. The 55-year-old chief’s stake in SK Holdings currently stands at only 0.02 percent.

The announcement also came as SK was accused of excessive internal trades among its subsidiaries, with the amount reaching 47 trillion won last year.

“The merger between SK and SK C&C is seen as aimed at evading the tougher regulations on internal trading, but it is also beneficial for Chairman Chey Tae-won,” said Park Joong-seon, a researcher at Kiwoom Securities.

Shares of SK and SK C&C soared 5.1 percent and 6.9 percent, respectively, after the merger plan was released on April 20.

While the planned mergers between units with a large stake owned by the founding family have come under scrutiny, an acquisition of sister companies in the same industry has received positive responses.

Hyundai Steel, South Korea’s No. 2 steelmaker, announced on April 8 it will acquire its sister company Hyundai Hysco, in its latest move to acquire steelmaking units.

Hyundai Hysco, which operates overseas steel service centers that supply to automakers like Hyundai Motor, saw its shares surge on the Seoul bourse on rising hopes for improved competitiveness.