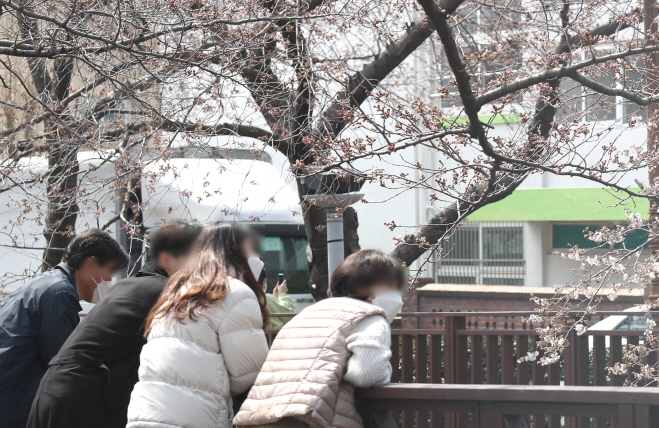 CHANGWON, March 23 (Korea Bizwire) – The southeastern city of Changwon on Monday barred public access to major cherry blossom-viewing sites to stem the spread of the coronavirus.

In a news conference, Mayor Huh Sung-moo announced additional measures to keep visitors away, as about 360,000 cherry trees in the industrial city, 400 kilometers south of Seoul, begin to bloom this week.

All the entrances of Gyeonghwa Station, one of the major cherry blossom-seeing attractions, were closed starting Monday. Automobile traffic will be blocked to the tree-lined Anmin Pass road beginning Tuesday, Huh said.

The walkways of Yeojwa Stream will be closed starting Tuesday as well, and visitors and cars will begin being banned Friday.

“Looking at the examples of other canceled festivals, many springtime picnickers traveled to festival sites to enjoy flowers despite the cancellations,” the mayor said.

“Once again, I earnestly ask the people to refrain from visiting Jinhae this spring,” he pleaded.

As of Monday, the city of Changwon reported 24 confirmed COVID-19 cases. Across the country, the virus has sickened more than 8,960 people and killed more than 110.

The local government will also enhance its crackdown on illegal parking and street vendors around those sites.

The city has already withdrawn its plans to set up 10 temporary parking lots and 10 public restrooms there for tourists.

It is the first time that Jinhae Gunhangje has been called off since its inception in 1963. The event attracted 4 million visitors last year.

Most other spring blossom festivals slated for this month from Seoul to the southern island of Jeju have been canceled. Organizers of tree-planting and flower-viewing events set for next month are considering calling them off.

Three elderly people in the southern parts of the country have been diagnosed with the novel coronavirus after visiting a site of a canceled flower festival last week with a woman who later tested positive.

“It may be difficult to continue to keep a recommended distance of 2 meters in festival sites,” Yoon Tae-ho, a senior health ministry official in charge of containment measures, told reporters later in the day.

“Going to festivals is not banned altogether, but if you go, it is advisable to avoid places crowded with people and it is necessary to wear masks if you have any symptoms.”