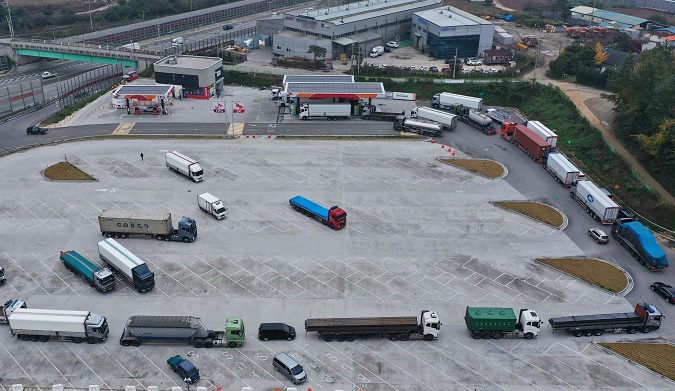 Freight vehicles wait in a long line to charge urea water solutions (UWS) at a charging station in Pyeongtaek, 70 kilometers south of Seoul, on Nov. 4, 2021, amid the ongoing supply shortage due to China’s export curbs. (Yonhap)

“We will establish a comprehensive response system like we have for material, components and equipment sectors so that we can utilize various channels to check cooperation in industrial and logistics communities, and diplomatic efforts with urea production countries, like China,” said Park Soo-hyun, senior Cheong Wa Dae secretary for public communication.

The task force will be led by An Il-hwan, the senior presidential secretary for economic affairs, and will include officials from the national security and policy advisor offices.

They will closely communicate with task forces in other ministries daily in an emergency mode until the supply of UWS or diesel exhaust fluid stabilizes.

The government plans to convene a separate meeting on Sunday to discuss the UWS supply shortage and other pending economic issues.

The meeting, the second of its kind, will be presided over by Finance Minister Hong Nam-ki, and attended by ministers of government offices related to economy, foreign affairs and security, as well as standing committee members of the National Security Council, officials said.

Prime Minister Kim Boo-kyum said the government is looking to diversify its import channels of UWS, as it has begun talking with several countries, including those in the Middle East.

“We cannot just look up to China,” he said at the National Assembly in Seoul. “We are also reviewing what the environment ministry can do in certain parts, since we cannot stop logistics.”

South Korea has been grappling with a lack of UWS and its soaring prices in recent weeks, especially in the logistics sector with freight vehicles, as China has restricted its shipments amid a trade conflict with Australia.

The country relies heavily on China for its supply of the agent. According to government data, a whopping 97.6 percent of the country’s imports of the material came from China during the first nine months of this year.

The government has pledged to crackdown hoarding of UWS and is reviewing plans to utilize industrial-use UWS to solve supply shortages in the transportation sector.