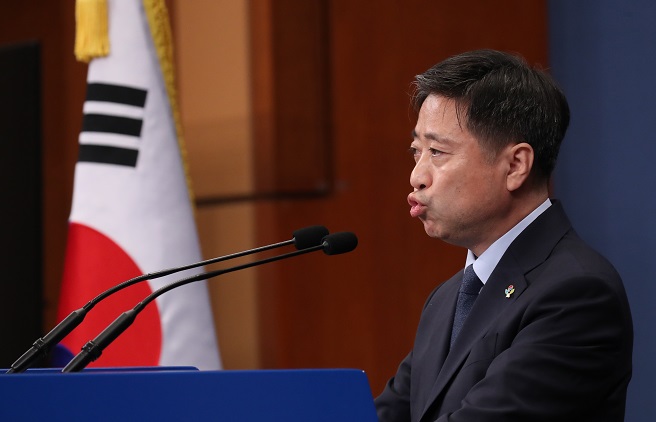 Chung Eui-yong, director of national security at Cheong Wa Dae, said in a statement that “A considerable portion of it is distorted.”

He played it down as based on what Bolton had seen from his “own viewpoint,” not “accurate facts,” accusing him of unilaterally disclosing details of diplomatic consultations based on trust among relevant governments.

Chung said it represents a violation of the basic principle of diplomacy, which could harm the sincerity of future negotiations “very seriously.”

He added such an “inappropriate” act could also undermine the allies’ efforts to advance joint strategies and bolster security interests.

He expressed hope the U.S. government would take an appropriate measure to prevent “such a dangerous case” from recurring.

In a separate statement, Yoon Do-han, Cheong Wa Dae’s senior secretary for public communication, said it’s not proper to offer such a “distorted” account, based on “bias and prejudice,” in connection with “candid and constructive” consultations between the leaders of the allies on the Korean Peninsula peace and an improvement in inter-Korean relations.

It was the first official response by Moon’s office to a flood of news reports on Bolton’s upcoming memoir, entitled “The Room Where It Happened.”

It’s scheduled to hit bookstores’ shelves on Tuesday (U.S. time), but its contents have been shared by a host of media in advance.

Cheong Wa Dae did not pinpoint which part has been distorted or is untrue.

“As we pointed out, it’s not (customary) to reveal dialogue between state leaders and the process of consultations in diplomatic relations,” a senior Cheong Wa Dae official told reporters on the condition of anonymity.

On Chung’s statement, the official said he had long worked as Bolton’s counterpart.

In fact, Bolton repeatedly mentions his consultations with Chung in the book, which recounts sensitive diplomatic discussions on North Korea during his service as President Donald Trump’s top security adviser.

Major events described include Trump’s trilateral meeting with Moon and North Korean leader Kim Jong-un at the truce village of Panmunjom, the no-deal Hanoi summit and Moon’s offer of declaring a formal end to the 1950-53 Korean War.

On Moon’s assessment of the North’s proposed dismantlement of the Yongbyon nuclear complex as a very meaningful first step” to enter an “irreversible stage of denuclearization.”

Bolton, known for his hawkish approach on Pyongyang, even reportedly wrote in the memoir that it was “schizophrenic” idea.

The Cheong Wa Dae official said Bolton may be schizophrenic himself.