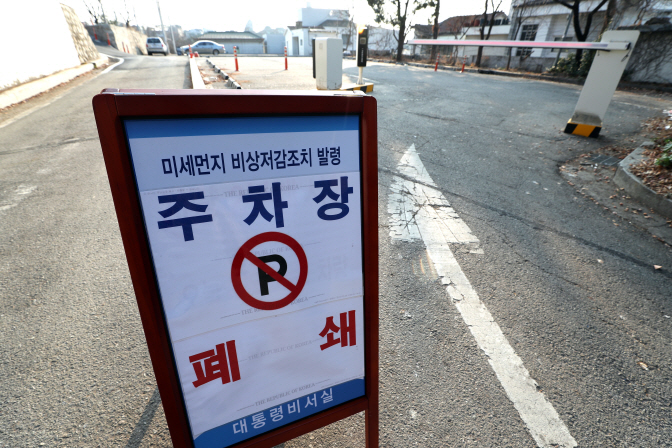 Cheong Wa Dae reminded employees about the policy and encouraged them to take public transportation. (Yonhap)

There were only two cars parked, as if they had been parked the day before, and there was a sign that read ‘parking lot closed’ blocking the entrance.

The President’s Chief of Staff, Noh Young-min, had to walk to work, and other employees also had to use public transportation to commute.

Cheong Wa Dae reminded employees about the policy and encouraged them to take public transportation the day before.

In addition, Cheong Wa Dae decided to operate only six electric vehicles and one hydrogen vehicle among the office’s usual fleet.

However, there is an exception. When the president participates in external events, for reasons of security, a regular vehicle is used.

Noh also has been using hydrogen or electric cars since the fine dust warning was issued, instead of his official vehicle.

It is Cheong Wa Dae’s new policy to take such action every time emergency fine dust reduction measures are invoked.

In a media interview, Noh explained that the government leading by example is just as important as other measures when the public is suffering from severe fine dust.