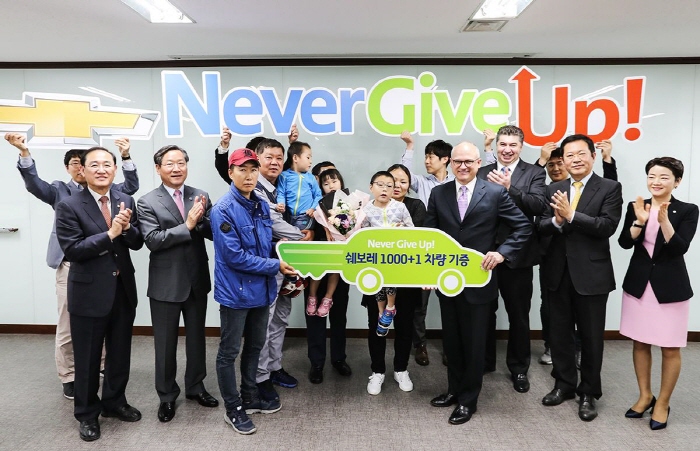 A Chevrolet Spark, the first vehicle donated, went to Yun Deok-hui and her family from Incheon after her case was reviewed by both GM and the Child Fund. (image: GM Korea)

SEOUL, May 15 (Korea Bizwire) — GM’s Chevrolet announced the launch of its “Never Give Up” campaign yesterday. Starting this month, a single car will be donated for every 1,000 vehicles sold as part of the campaign.

Barry Engle (president of GM International), Kaher Kazem (president and CEO of GM Korea), Yoo Jeong-bok (mayor of Incheon) and Park Eun-sook (Green Umbrella Child Fund) were present at the kickoff ceremony at GM Korea’s office in Buyeong, Incheon during which the first vehicle was donated.

A Chevrolet Spark, the first vehicle donated, went to Yun Deok-hui and her family from Incheon after her case was reviewed by both GM and the Child Fund.

Yun has had difficulty using public transportation to take her child who has a physical disability to school and to the hospital. “I will now be able to take the Spark in comfort, making me more independent,” said Yun.

An employee at GM Korea said GM’s new “Never Give Up” campaign was a way to give back to the community after going through the difficult process of stabilizing the business.

“GM hopes to contribute to society and become a car brand trusted by the public,” said the employee.

Chevrolet plans to sign MOUs with GM Korea’s own organization as well as other non-profit organizations including the Child Fund as part of the “Never Give Up” campaign.

The carmaker plans to support the local community by helping the less fortunate prepare for the future.