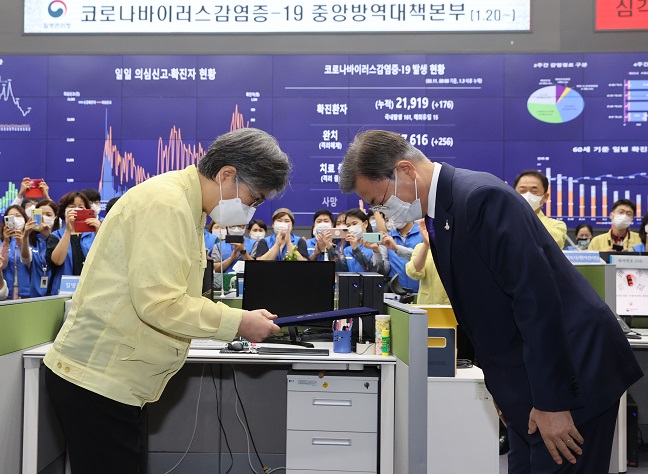 President Moon Jae-in (R) presents Jeong Eun-kyeong with a certificate of appointment as the first head of the Korea Disease Control and Prevention Agency (KDCA) during a ceremony held at the emergency situation center of the Korea Centers for Disease Control and Prevention (KCDC) in Cheongju, North Chungcheong Province, 130 kilometers south of Seoul, on Sept. 11, 2020. (Yonhap)

Moon made a visit to the KCDC headquarters in Cheongju, North Chungcheong Province, some 130 kilometers south of Seoul, to present her with a certificate of appointment in person.

The move apparently reflects the public recognition of her dedicated service in the country’s fight against COVID-19 and expectation for her role in the promoted position.

In South Korea, the prime minister usually bestows a letter of appointment on a vice ministerial official. It is also highly unusual for the president to hold such an appointment ceremony outside Cheong Wa Dae in Seoul.

“For me, I think, it’s the first time to hold a ceremony outside Cheong Wa Dae to confer a letter of appointment on a high-ranking government official,” Moon said.

He said he had considered Jeong’s current situation in which she can’t leave her work even for a moment.

Jeong’s colleagues were present at the brief event instead of her family members.

Moon expressed hope that the new agency will play a bigger role, with its status enhanced.

He took note of public trust in the KCDC under Jeong’s leadership.

Jeong pointed out that the new agency is being born in “this grave situation.”

She said she is regarding its creation as reflecting the people’s expectation for a “specialized, systemic and preemptive” response to novel infectious diseases that threaten their health and endanger society’s safety.

She pledged that the KDCA will do its best as the “control tower” of the national campaign to overcome COVID-19 and prevent disease transmissions. 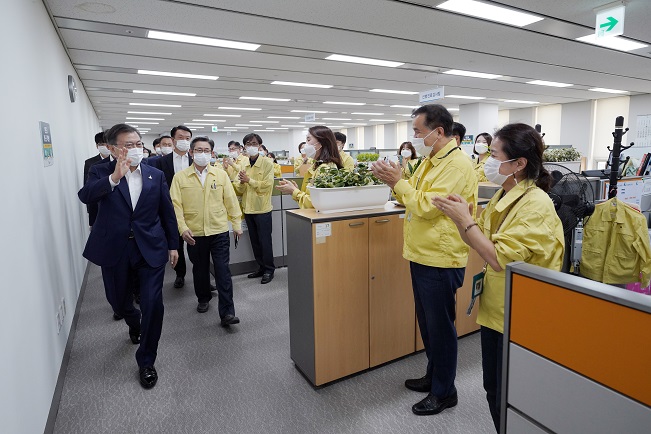 President Moon Jae-in (L) is greeted by officials at the Central Disaster Management Headquarters in the administrative town of Sejong, some 130 kilometers south of Seoul, on Sept. 11, 2020. (Yonhap)

Speaking in a closed-door meeting with the president right after the official ceremony, Jeong presented a short-term outlook that coronavirus cases will likely decrease, albeit not sharply, if social distancing is maintained, as the basic reproduction number has fallen below one.

The number represents the expected number of cases directly generated by a single patient.

But she voiced worries about lingering cluster infection risks from the highly contagious virus, as seen in recent cases linked with church events and door-to-door sales activities, according to Cheong Wa Dae spokesman Kang Min-seok.

“We are keeping a close eye (on the situation),” she was quoted as saying.

Moon then visited the Central Disaster Management Headquarters on the coronavirus response, which is located in the nearby administrative town of Sejong, home to a government office complex.

He expressed appreciation for its officials’ service and encouraged them to keep up their work.

The 57-year-old has served various posts at the health ministry, as well as director general the Organization for Economic Cooperation and Development (OECD) KOREA Policy Center.