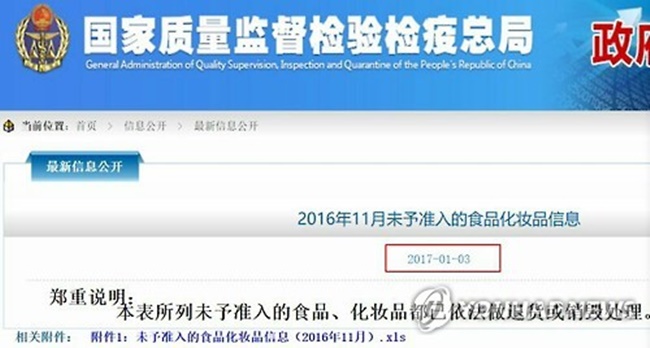 Due to the import denial, some 33 tons of South Korean food and cosmetic items could not enter the Chinese market, they said. They accounted for 17.8 percent of all the foreign foods and cosmetics which were denied import approval by the administration that month. (Image: Yonhap)

China’s General Administration of Quality Supervision, Inspection and Quarantine refused to give import licenses to a total of 466 items in March and 83 of them were those from South Korea, the industry sources said, quoting the ministry’s March list released to them.

Due to the import denial, some 33 tons of South Korean food and cosmetic items could not enter the Chinese market, they said. They accounted for 17.8 percent of all the foreign foods and cosmetics which were denied import approval by the administration that month.

The list showed South Korean goods were most frequently denied import licenses in March. The U.S. had a total of 49 food and cosmetic items prohibited, followed by Taiwan with 41 items and Thailand with 39 items.

The figures show strict import standards being applied to South Korean goods in China as the neighbors are entangled in a diplomatic feud over the South Korean deployment of the Terminal High Altitude Area Defense system.

In early March, South Korea and the U.S. brought in the first elements of a THAAD battery here, initiating the installation pledged a year earlier.

The installation progressed further in the following months, with a high-profile X-band radar and mobile launchers, key components of the system, delivered to the host site in the southeastern county of Seongju, North Gyeongsang Province, on Wednesday.

After the deployment on Wednesday, China pledged to take action in response.

“We are hearing that the quality supervision ministry’s inspection of South Korean foods and cosmetics got much tighter here as the THAAD issue became more visible,” one of the sources said. “Under that influence, the process of customs clearance for South Korean goods is becoming more difficult as well.”

The banned food items in March, meanwhile, also included candies produced by Lotte Group, which traded in its golf course to be used for the deployment.

The administration gave the reason of excessive food additives for the import denial.