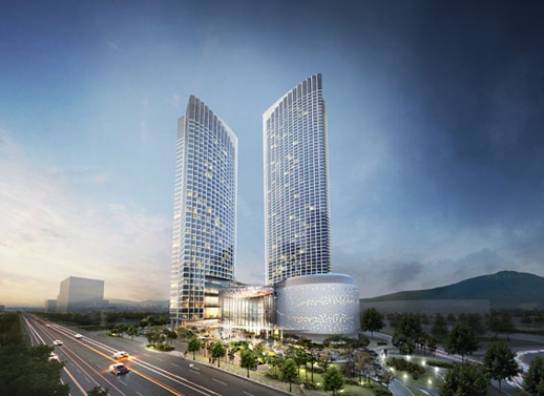 The group is involved in the Jeju Dream Tower project as well. (image: Dongwha Investment & Development)

SEOUL, Nov. 19 (Korea Bizwire) – Greenland Group, China’s largest real estate developer, is in talks to acquire a site near the Digital Media Center in Seoul’s Sangam-dong in the northwest following its buying spree in Jeju Island, reported the Seoul Economic Daily on November 18.

By quoting an official of the Seoul metropolitan city government, the business daily said the Chinese state-backed group delivered its intentions to make a large-scale investment in a site adjacent to the Digital Media Center to Mayor Park Won-soon. Earlier on November 4 when Mr. Park visited the group’s Shanghai main office, its chairman Zhang Yuliang revealed his desire to purchase the property to him.

The size of the site Greenland Group is interested is 37,262 square meters in total. The site was earmarked by the Seoul city government to build a skyscraper that will become a landmark of the city. Up to 50 percent of the building’s floor area must be used for lodging purposes.  Since 2008, the Seoul Lite Tower consortium led by Daewoo Engineering & Construction has initiated the construction project. But the project has been on hold since the 2008 global financial crisis as the consortium members failed to make installment payments for the land use right to the city.

Greenland Group proved its financial resourcefulness in the Jeju property market. In August this year, the company agreed with Jeju Development Corporation under the Ministry of Land, Infrastructure, and Transport after eight months of negotiations to build hospitals within Jeju Healthcare Town earlier than scheduled.

The group had signed a business partnership deal with Jeju Development Corporation in October 2012 to invest a total of 1 trillion won to build facilities in stages in a 1,539,000-square-meter site. As part of the first-stage plan, it is currently working on a construction project to build a 400-guestroom resort hotel at the cost of 120 billion won. Greenland Group is a partially state-run enterprise in which the Shanghai city government has a stake.

In addition, the group is involved in the Jeju Dream Tower project as well.  After a major redesign of the building with much fewer floors than originally planned due to concerns that the newly erected building may spoil the island’s scenic beauty, Greenland Group took a majority stake in Dongwha Investment & Development, the principal builder of the project.

Dongwha Investment & Development, an affiliate of Lotte Tour Development, had won the construction license in May 2009 to build a 218-meter high-rise in the center of Jeju City. Since then, the company was unable to find major investors for the Dream Tower project until Greenland Group offered it 1 trillion won in investment. The project was given a green light in May this year after Greenland’s investment.