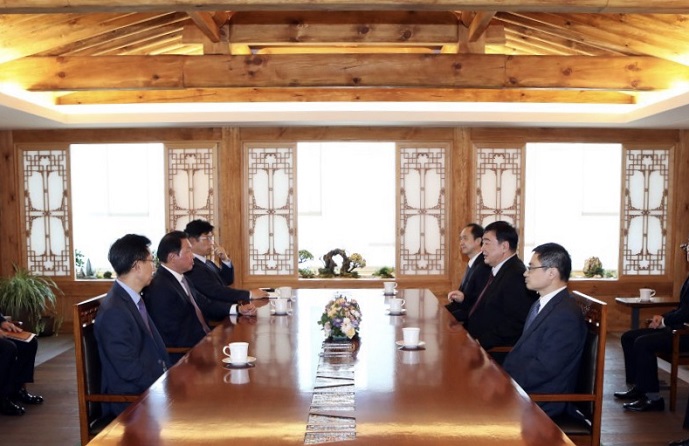 This photo, provided by the Chinese Embassy in Seoul, shows SK Group Chief Chey Tae-won (2nd from L) and Chinese Ambassador Xing Haiming (2nd from R) holding a meeting at the embassy building in Seoul on June 3, 2020.

The meeting, which took place on Wednesday, was the ambassador’s first meeting with the chief of a top South Korean conglomerate since he took office as the top envoy to Seoul in January this year, according to the embassy.

During the talks, they discussed topics of mutual interest, including enhancing bilateral economic cooperation at the industry level and responses to the coronavirus pandemic.

Xing assessed that SK Group has contributed positively to China-South Korea diplomatic ties and that has made a great impression on him, the embassy said.

The ambassador called for SK and other Korean companies to actively expand their investment in China, with hopes that such cooperation will “qualitatively advance” the relationship of the two countries.

In response, Chey noted that China is the country where SK Group has most heavily invested in, with more than 100 affiliated firms in China.

Chey also said that SK has been making efforts to fulfill social responsibility by working with related government agencies in China so as to benefit both countries, according to the embassy.