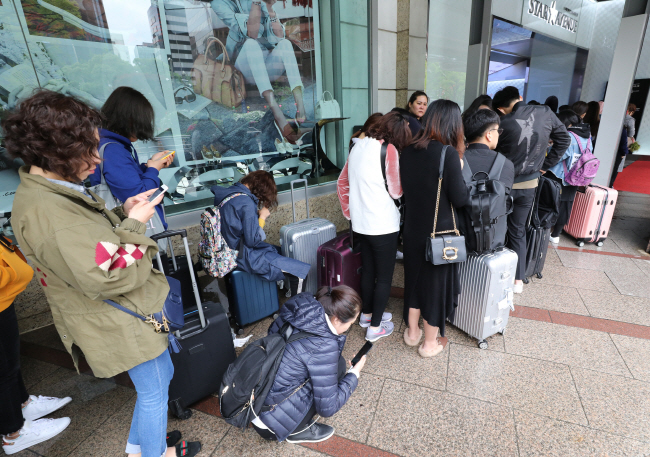 The assessment came as official data from the Bank of Korea showed that 475,000 Chinese nationals visited the country in October, up 37.6 percent from a year earlier.

Local tax-exempted outlet operators like Lotte Duty Free and Shilla Duty Free, as well as the umbrella Korea Duty Free Shops Association (KDFA), said that most Chinese customers were individual travelers and so-called “daigongs,” rather than “youkers,” or group travelers.

Daigongs are small-scale merchants who buy products here on behalf of customers back home.

Chinese authorities clamped down on group tourist packages to South Korea in March 2017 after Seoul allowed the stationing of a U.S. anti-missile defense system on its soil, despite stringent objections from Beijing. China has since partially lifted restrictions, but the number of group tourists has not returned to past levels.

Lotte said that it had almost no youkers, who enter the country on a group visa, and that most shoppers were individual travelers or small merchants.

It said that before the frictions caused by U.S. Terminal High Altitude Area Defense deployment, there were 7,000-8,000 youkers daily at its main duty free store in downtown Seoul. This dropped to around 2,000 after the uproar and then to zero.

Shilla said it did receive 820 youkers in October but that numbers have decreased significantly.

Despite the decrease in the number of youkers, KDFA data showed sales of duty free stores in the country hitting US$1.43 billion in October, up 28.6 percent on-year. In the first nine months of the year, sales posted by duty free stores reached $12.91 billion, already exceeding the $12.83 billion tallied for the whole of last year.

“The increase is mainly due to daigongs, who focus on buying specific merchandise,” a duty free store insider said. He added that with many stores providing an average of 20 percent refunds on total purchases as an incentive to attract such merchants, the profit margin is not big. He claimed this undermined the bottom line of stores even if sales had risen.