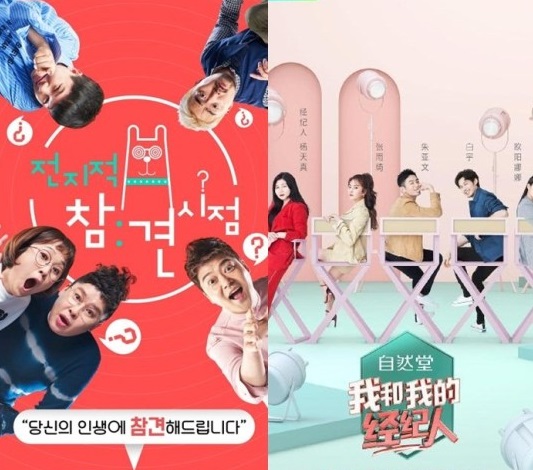 MBC’s “Omniscient Interfering View” (L) and Tencent’s “Me and My Manager” (R).

SEOUL, Apr. 4 (Korea Bizwire) — For some time, China has been copying Korean entertainment shows, a practice that has become more explicit since China banned Korean content.

Now, many Chinese are concerned about the malpractice.

A new Chinese entertainment show, “Me and My Manager”, which first aired on March 17, has recently been accused of copying Korea’s “Omniscient Interfering View”, one of the most popular entertainment programs in South Korea.

China has already been accused of copying various Korean entertainment shows, including tvN’s “Yoon’s Kitchen” and “Three Meals a Day”; Mnet’s “Show Me The Money” and “Produce 101″; and JTBC’s “Please Take Care of My Refrigerator”, “Hidden Singer”, and “Hyori’s Home Stay”.

All of these programs have been produced and aired without acquiring rights from Korean broadcasting companies.

“Copied content is often unsuccessful. If the format is purchased or rights licensed, we can deliver the details as well as provide follow-up services,” said Na Young-suk, a television producer at CJ ENM.

MBC, a major South Korean broadcasting company, confirmed that China’s “Me and My Manager” is an unlicensed, copied program.

“The Chinese version of Omniscient Interfering View is currently in development under the title ‘The Relationship Between Us’,” said MBC.

“Tencent, responsible for producing Me and My Manager, did not conclude any licensing agreement with us.”

Many Chinese netizens are concerned about China’s ‘copycat’ culture. On Weibo, a Chinese equivalent of Twitter, many said they were “ashamed,” or “embarrassed.”

Some, on the other hand, argued that “Me and My Manager” falls short of copying Korea’s “Omniscient Interfering View”, since it focuses on the reality of Chinese corporate culture, instead of the relationship between managers and celebrities.