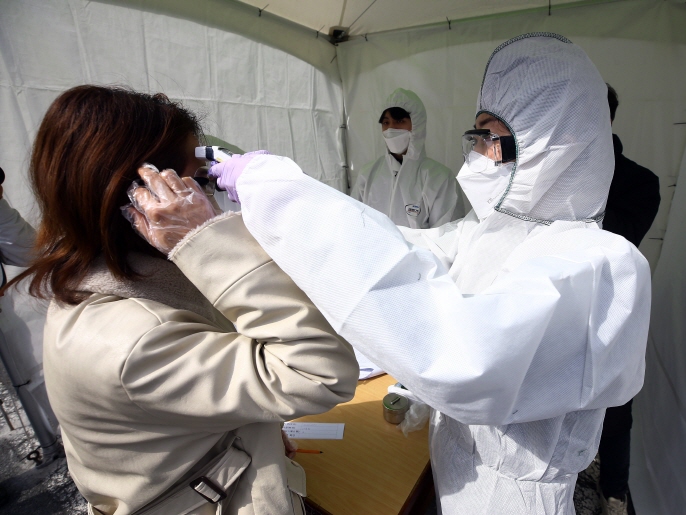 A Chinese student is checked by a school official at Yeungnam University in North Gyeongsang Province ahead of entering a school dormitory on Feb. 27, 2020. (Yonhap)

SEOUL, Feb. 28 (Korea Bizwire) — An increasing number of Chinese students enrolled in universities here are canceling their trips to the country ahead of the new school year amid heightening fears over the new coronavirus, data showed Friday.

Roughly 1,300 students were set to arrive here on Feb. 25, but 36 percent of them apparently canceled their trips, according to the data by the education ministry.

On Feb. 24, around 15 percent of students who were set to arrive here also canceled their trips.

Separate data by the justice ministry, which oversees immigration services, also indicated a slump in arrivals from China.

The data comes as an increasing number of Chinese nationals are seemingly postponing or canceling their trips to South Korea, which is fighting to contain COVID-19 infections.

South Korea has reported more than 1,700 cases of the contagious virus so far, with the number growing by the hundreds in the past few days.

Of the 70,000 Chinese students enrolled in local universities, nearly half of them have yet to return to the country where the new school year starts in March.

In efforts to minimize risks from the virus, the ministry has advised universities to postpone the new school year by up to four weeks.

Classes at kindergartens, elementary, middle and high schools across the country have also been delayed by a week.