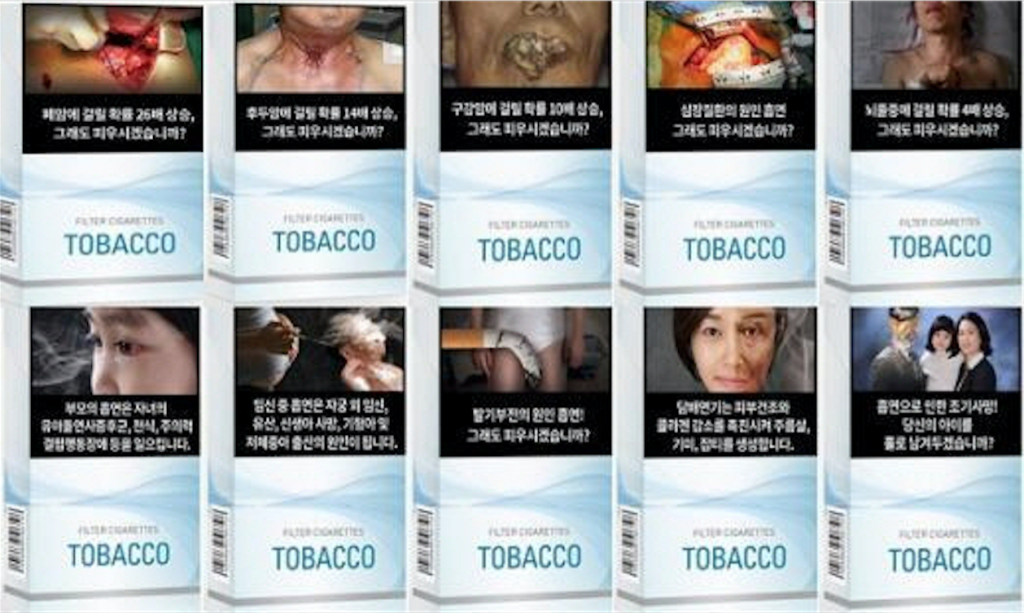 The health ministry has confirmed 10 images, all of which are related to diseases and outcomes of smoking, which will start appearing on cigarette packs shipped after December 23. (image: Ministry of Health & Welfare)

SEOUL, Oct. 18 (Korea Bizwire) – A recent report by the National Assembly Budget Office forecasted that the upcoming mandate to include warning images on cigarette packages will help reduce Korea’s tobacco consumption, though the effects will be “limited”.

The number fell by 18.4 percent last year following an increase in cigarette prices by 2,000 won ($1.76) in January 2015, and tobacco consumption is now on the rise again, said the report.

However, NABO anticipated that consumption, along with cigarette shipments, would gradually fall starting in 2017 with the new anti-smoking campaign taking effect in December.

Other countries that previously made mandatory such warning images saw a steady decline in their cigarette consumption per capita.

According to data from the health ministry and the Korea Health Promotion Foundation, Canada saw its per capita consumption decline by 9.4 percent after a year after covering 75 percent of its cigarette packages with warning imagery in 2001.

But the report also said the effects on Korea’s tobacco consumption will remain “limited” given that the new images will cover only 30 percent of the cigarette packets (50 percent with written warning), in addition to the provision that “images must not induce extreme disgust”.

Meanwhile, the health ministry has confirmed 10 images, all of which are related to diseases and outcomes of smoking, which will start appearing on cigarette packs shipped after December 23.