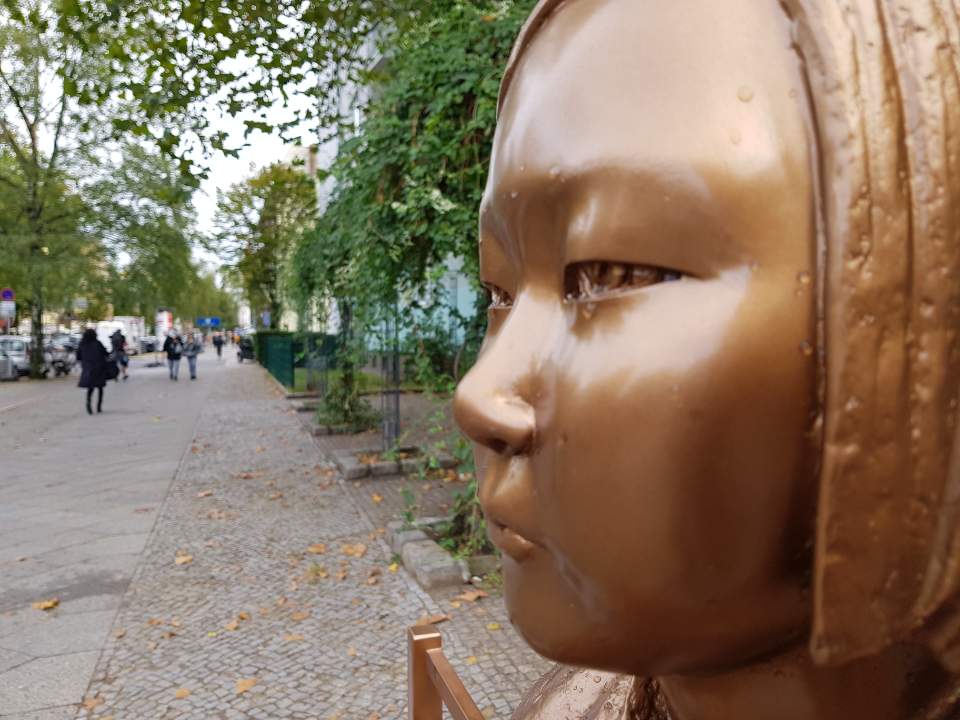 SEOUL/BERLIN, Oct. 12 (Korea Bizwire) — Civic activists based in Germany are planning to apply for an injunction Monday against Berlin city authorities’ removal order for a statue erected in the German capital of a girl symbolizing Korean victims of wartime sexual slavery, informed local sources said.

The injunction application will be filed by Korea Verband, a Germany-based civic group with South Korean ties, with Berlin’s administrative court during the day, they said.

Korea Verband and its supporters set up the statue, formally called “The Statue of Peace,” in a public place in Berlin’s Mitte district last month to internationally publicize the issue of wartime sexual slavery victims.

Nine days after its unveiling ceremony, however, the Mitte district office ordered Korea Verband to remove the statue by Oct. 14 after the Japanese government expressed regrets over its installation.

The district office threatened to forcibly execute its order if the removal is not finished by the deadline.

The planned legal battle to protect the statue came amid an ongoing civic petition campaign opposing the removal order. The campaign under way at www.petitionen.com had received signatures from nearly 1,800 people, mostly Germans, as of 2 p.m. Sunday.

German civic activists and Korean residents in Germany are also planning to hold a rally near the statue Tuesday to protest against the Berlin authorities’ removal order.

A separate online petition campaign has been launched in South Korea through the website of Cheong Wa Dae, the South Korean presidential office.

The Korean Council for Justice and Remembrance for the Issues of Military Sexual Slavery by Japan, a Seoul-based civic group working for the rights of Korean victims of wartime sexual slavery, has sent a letter to the United Nations’ special rapporteurs, arguing that any attempt to remove the statue is a challenge to the U.N.’s efforts to rewrite human rights norms by viewing violence against women as a universal human rights issue.

The Korean Council also insisted that Berlin city authorities’ removal order for the Statue of Peace and pressure from Japan’s government and right-wing groups are a disparagement of efforts to remember the sexual slavery issue involving the Japanese imperial army and violate the rights to freedom of expression. 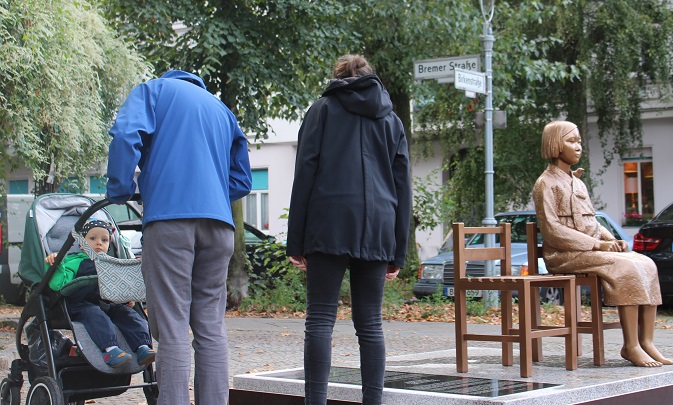 This file photo, taken on Sept. 27, 2020, shows German citizens reading the epitaph of “The Statue of Peace” set up on a street in Berlin. (Yonhap)

Officials at Korea Verband said they expect the Berlin court to accept its application for an injunction, as the Mitte district office claimed in its removal order that it was not informed of the content of the statue’s inscribed epitaph in advance, though it had caused diplomatic tension between Germany and Japan.

The officials said they had not been asked by Berlin city authorities to present the content of the epitaph in advance and its content is not problematic.

The epitaph pays tribute to victims of Japanese wartime sexual slavery and honors the courage of survivors who have stood up publicly to raise awareness and prevent future war crimes and atrocities.

“Some lawyers say the Mitte district office was supposed to demand the replacement of the epitaph ahead of issuing a removal order,” a Korea Verband official said.

“The possibility of the court accepting the injunction application seems very high because the Mitte district office’s decision was an unreasonable administrative order,” the official said.

The injunction application, if approved, will lead to a formal court hearing, suggesting it will take considerable time before the court makes its final judgment.