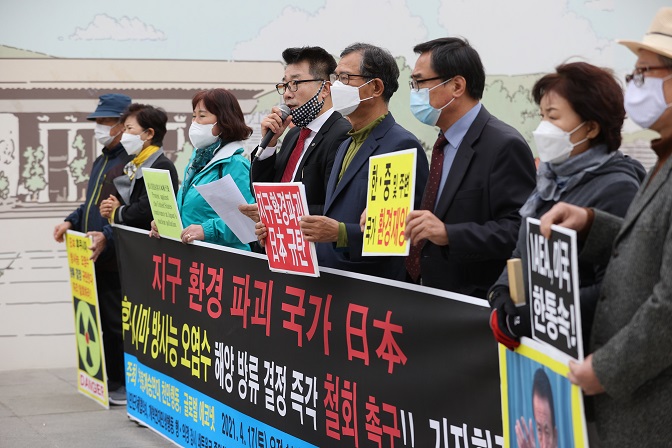 Civic groups, including the Global Econet, hold a press conference at Gwanghwamun Square in Seoul on April 17, 2021, to call for Japan to retract its decision to release radioactive water from the crippled Fukushima nuclear power plant. (Yonhap)

Eight groups, including the Global Econet, lambasted the plan to release the radioactive water as an “irresponsible” act and demanded the cancellation of the decision, during the conference at Gwanghwamun Square in central Seoul.

On Tuesday, Japan finalized the decision to start discharging the tritium-laced water into the sea in 2023 in what is expected to be a decadeslong process, as all storage tanks at the Fukushima plant are expected to be full as early as the fall of 2022.

“The decision to discharge tainted water into the ocean is an irresponsible decision that did not consider the safety of neighboring countries,” the groups said in the joint statement. “We call for the immediate retraction of the decision.”

After the press meeting, civic group members moved close to the Japanese Embassy in Seoul and read out a statement calling for Tokyo to nix its decision.

A progressive group of university students also gathered in front of the embassy and stressed that they cannot turn a blind eye to Japan’s decision.

Some students scuffled with the police when the law enforcement staff tried to stop the students from trying to enter the embassy to deliver their statement urging Tokyo to stop the water discharge plan.

Some activists staged a protest near the embassy, holding up a sign reading “If the Fukushima contaminated water is safe, you drink it.”