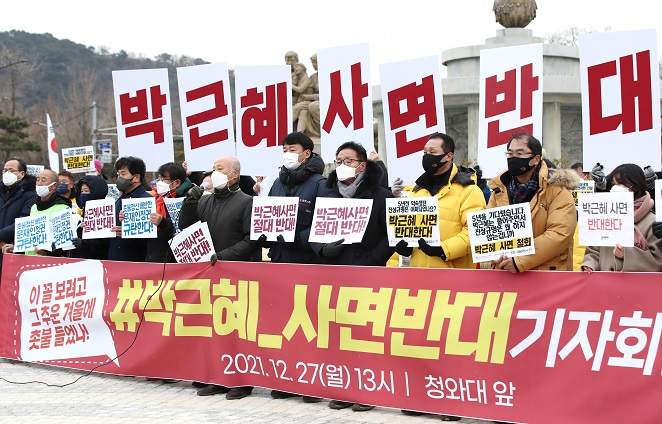 SEOUL, Dec. 27 (Korea Bizwire) — Civic groups vented outrage Monday over the recent special pardon for ex-President Park Geun-hye imprisoned on corruption charges, arguing that the decision is a blow to the country’s democracy.

Activists representing 1,001 civic groups, including the Korean Confederation of Trade Unions (KCTU) and the People’s Solidarity for Participatory Democracy, staged a press conference in front of Cheong Wa Dae earlier in the day, calling for the withdrawal of the amnesty.

“History will remember Moon as a sinner who flouted democracy and turned back the advance of the wheel of history.”

The angry protesters also stressed the pardon may engender “seeds of discord” that could in turn originate “excessive social dissipation.”

In a separate press conference, civic groups representing families of those killed in the sinking of the ferry Sewol in 2014, when Park was president, also lamented the pardon, saying it is premature because justice has yet to be delivered over the tragic incident.

“Granting a special pardon for someone who does not repent for (her) wrongdoing constitutes a regression of democracy and a blow to the zeitgeist,” the protesters said. They later handed in a letter of protest to Cheong Wa Dae.

On Friday, the government announced special pardons for Park and some 3,000 other convicts in celebration of the new year. The special amnesty, granted by Moon, was decided in consideration of Park’s deteriorating health.

Park has been serving a combined 22-year prison sentence since March 2017 after being impeached and removed from office over far-reaching corruption charges and an influence-peddling scandal.