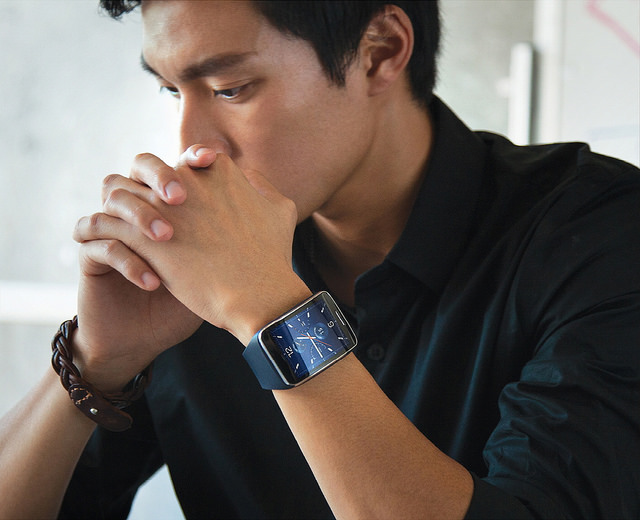 Equipped with the new system, Samsung’s Gear S can detect and distinguish a user’s biological patterns and use them in the process of authentication for online payments. (image: Samsung Electronics)

SEOUL, March 31 (Korea Bizwire) — Samsung Electronics filed a patent for an online payment system triggered by clenching and opening one’s fist while wearing the Gear S smart watch, according to a published document from the Korean Intellectual Property Office (KIPO) and the United States Patent and Trademark Office on March 30.

Samsung Electronics’ new recognition system uses an authentication method that analyzes parameters such as micro to macro muscle movements, ECG signs and users’ voices, and compares these values over time.

Equipped with the new system, Samsung’s Gear S can detect and distinguish a user’s biological patterns and use them in the process of authentication for online payments. Samsung’s new technology is expected to result in a recognition process that is faster and more convenient than iris or fingerprint recognition.

As Samsung Electronics has been equipping their smart watches with sensors detecting biometric data such as pulse and oxygen saturation rates, the new recognition technology is expected to be easily commercialized. The new technology will also work to enhance data security in smart watches.

The company said in the patent application that as mobile devices are prone to be handled by unspecified individuals, measures limiting access to data are needed more than ever.