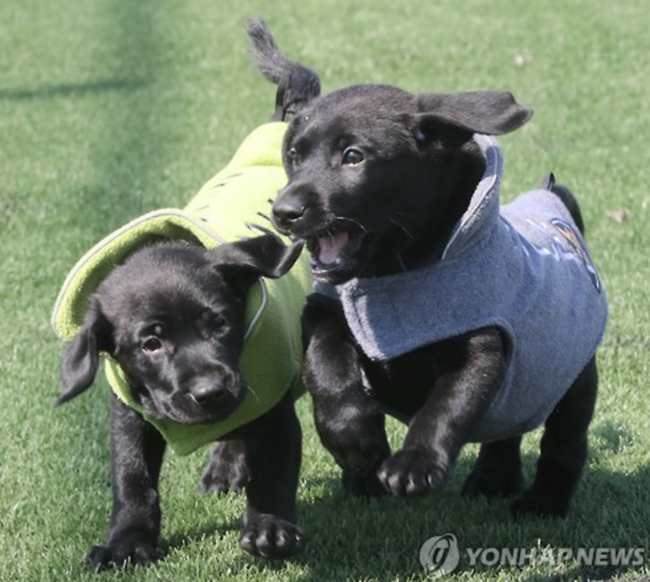 SEOUL, March 10 (Korea Bizwire) — Two dogs cloned from the cells of a veteran police sniffer dog will be assisting the police in South Korea after undergoing a training program for explosives detection.

The two Labrador Retriever puppies born in a lab were modeled after the famous sniffer dog Neo, who is now retired and has the best performance track record in the country.

Cloning and deployment of special forces dogs began in 2012 as part of an initiative by the Rural Development Administration (RDA), in an effort to slash spending on police dog training.

Special forces dogs come at a high price. For every dog, an estimated 1.3 billion won ($112,554) is spent on training them for multiple purposes such as human rescue, explosive detection and custom service.

Despite the price, only three out of ten dogs make it through the exhaustive training process to serve on police forces.

Clone dogs, on the other hand, have a much higher pass rate of 80 percent, bringing down the training costs to 46 million won ($39,775). Compared to regular dogs, they offer savings of 65 percent.

“Sharing a competent and well-trained dog is no longer impossible, thanks to cloning,” said Im Gi-soon, a chief animal biotechnologist at the National Institute of Animal Science (NIAS).

“By sharing the database of cells from police dogs among scientific organizations, hopefully more clone dogs can be bred to assist police.”

South Korea is one of the leaders in animal cloning. Last year, researchers at the Sooam Biotech Research Foundation made headlines when they successfully cloned a dead dog at the request of a British couple.