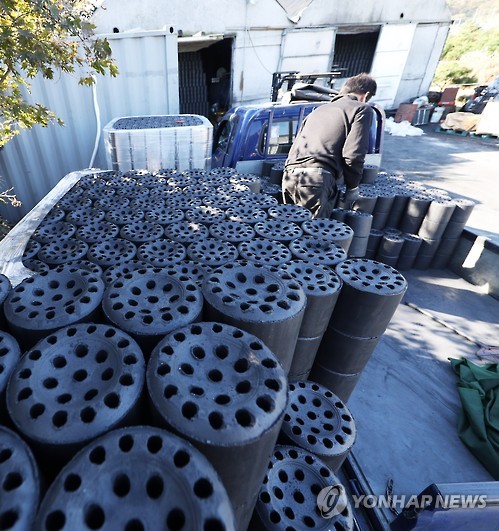 “People have grown very passive even for legitimate donations and sponsorships since the anti-corruption law took effect (in September).” (image: Yonhap)

SEOUL, Nov. 10 (Korea Bizwire) – Winter is rapidly approaching, but donations of yeontan, coal briquettes that are used in low-income households for cooking and heating, are not as abundant as they were last year.

Officials point to a combination of factors for the change, including the introduction of the new anti-corruption law, President Park’s political scandal, and the country’s prolonged economic downturn.

Sources say that 31 yeontan banks across the country saw a 40-percent drop in their usual stock of coal briquettes compared to last year.

A yeonton bank in North Chungcheong Province had supplied 36,330 yeontans so far to 182 households since it began this year’s campaign on September 10.

But with the goal of delivering 200,000 units, with 900 remaining in storage and donations grinding to a halt, the bank now has to consider purchasing yeontan on credit and pay back its balance later on.

“What worries us more is that we’ve had more organizations donating in advance, knowing that our supply is usually short early on into the project,” said Pastor Kim Jeom-yong from the bank. “Donations are likely to fall short throughout the month and in December, which is when the winter season actually begins.”

The North Chungcheong bank, however, is actually better off than others.

Banks in Busan are suffering even more.

The nation’s shipbuilding and shipping industries, which had been the economic stronghold for the region, are mired in a severe financial crisis, and as such donations have plummeted this year by some 90,000 units.

Yeontan bank officials point to the new corruption law and the political scandal as major causes.

Although the anti-corruption law only limits government officials, journalists, and private faculty from receiving a certain amount of money or goods, public institutions and businesses are seemingly refraining from making donations to avoid attracting any unwanted attention, said a bank official.

Of all donations, an average of 70 percent usually comes from public institutions and businesses, according to Huh Gi-bok, the president of Yeontan Bank.

“People have grown very passive even for legitimate donations and sponsorships since the anti-corruption law took effect (in September),” he said. “We’ve even had a company that begged us not to disclose information related to its donation.”

Meanwhile, the political upheaval that is sweeping the nation is also leading to an apparent lack of interest in low-income families, with more people occupied with the biggest government scandal the country has seen in years.

“We’re in desperate need of society’s attention and solicitude, so that struggling neighborhoods can survive through the winter with warmth,” Huh said.