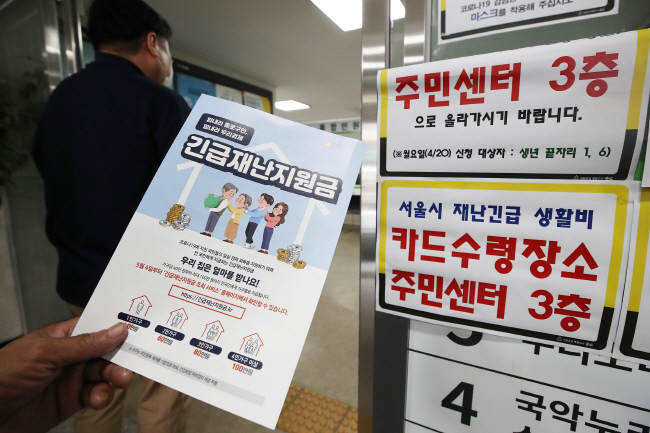 A citizen looks at materials explaining how to receive emergency disaster relief funds at a community center in Seoul on May 4, 2020. (Yonhap)

Alba Heaven, an online part-time job portal, conducted a study of 6,226 university students and job seekers, 74.5 percent of whom believed that the funds helped them overcome economic difficulties.

Late last month, the National Assembly approved an extra budget bill focused on the payments of the unprecedented relief money to all the nation’s 21.71 million households to lessen the financial strain brought on by the ongoing COVID-19 pandemic.

At 51.3 percent, a bit more than half said the funds are helpful because they support the livelihood of those who lost their jobs due to the coronavirus, while 41.2 percent said the funds encourage consumption, revitalizing the economy.

Another 37.4 percent wanted the government and local authorities to cut fees for transportation and mobile plans, in addition to the current relief programs.

Others wanted support in hiring young people (31.4 percent), and expanding the number of short-term jobs (28.4 percent).

Close to 40 percent had either received or plan on applying for the funds offered by the government and local authorities.

Most of the respondents spent the funds on food (54.5 percent) or everyday necessities (33 percent).