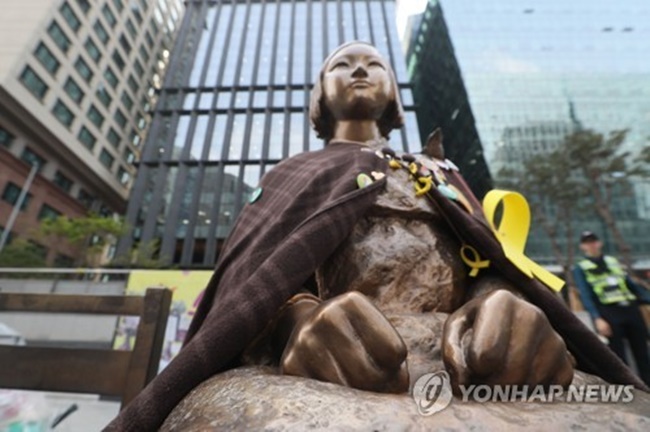 “The South Korean government’s position is that efforts to commemorate the comfort women issue as a historical lesson will continue regardless of the comfort women deal,” foreign ministry spokesman Noh Kyu-duk said. (Image: Yonhap)

The stance came in response to Japanese Chief Cabinet Secretary Yoshihide Suga’s criticism of the South Korean gender ministry’s plan to build a memorial monument at the National Mang-Hyang Cemetery, a resting place in Cheonan, central South Korea, for Korean compatriots who died in foreign lands and World War II sex slaves, also known as “comfort women,” within the year.

Suga said in a press briefing earlier in the day that the memorial monument plan is in breach of the comfort women deal, “which settled the comfort women issue ultimately and irreversibly.” He also said the plan is tantamount to “pouring cold water” on bilateral efforts to develop the relationship in a forward-looking manner.

“The South Korean government’s position is that efforts to commemorate the comfort women issue as a historical lesson will continue regardless of the comfort women deal,” foreign ministry spokesman Noh Kyu-duk said.

“Under this position, our side has told Japan that the construction of the memorial monument does not run counter to the comfort women deal,” he noted.

South Korea’s previous Park Geun-hye government signed the deal in December 2015 to settle the grievances of Korean women mobilized to serve at front-line brothels for Japanese troops while the Korean Peninsula was under Japan’s colonial rule from 1910 to 1945.

The new administration of President Moon Jae-in is currently reviewing the legitimacy of the deal, however, after declaring that it was signed without public support.