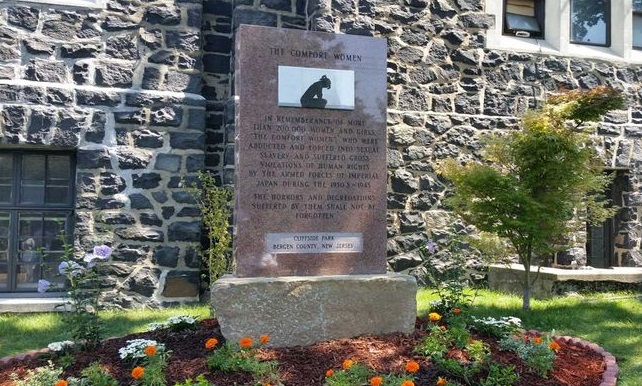 A monument to comfort women stands in the garden of Trinity Episcopal Church near Cliffside Park, New Jersey. (image: Yonhap)

CLIFFSIDE PARK, New Jersey, Jul. 19 (Korea Bizwire) — A monument was unveiled in New Jersey Wednesday to commemorate the Korean women who were forced into sexual slavery for Japanese troops during World War II.

It marked the fourth such monument in New Jersey and the eighth in the United States.

Historians estimate that up to 200,000 women, mostly from Korea, were mobilized by the Japanese military to work in front-line brothels during the war. Korea was a colony of Japan from 1910-45.

The issue of the “comfort women,” a euphemistic term for the victims, has long been a thorn in South Korea-Japan ties. The two sides reached a deal in 2015 to resolve the issue, but many of the victims have rejected it, saying it fails to address their grievances.

The tablet is engraved with a picture of a girl crouching with her face in her hands, as well as a description of the atrocity that took place.

Kim Jin-sook, a leader of the Korean community, said she hopes the monument will serve as a reminder of the painful history of the comfort women and of the fact that it should not be repeated.