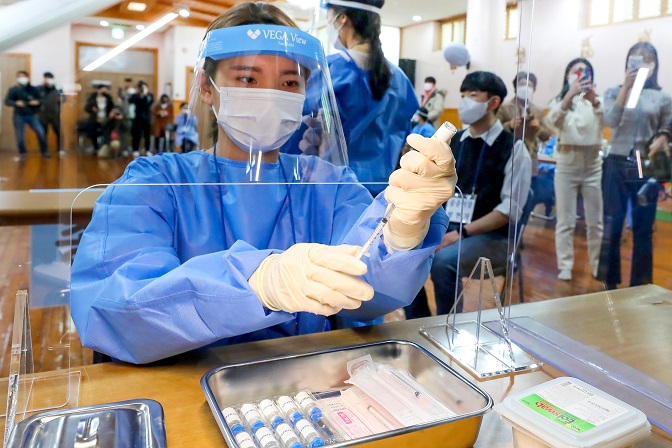 A medical worker carries out a mock training exercise for COVID-19 vaccinations at a rehabilitation facility in Gwangju, South Jeolla Province, on Feb. 23, 2021, in the runup to the beginning of a nationwide vaccination program three days later. (Yonhap)

SEOUL, Feb. 23 (Korea Bizwire) — A conflict between doctors on one side and the government and the ruling party on the other has become heated over a bill that would disqualify medical doctors convicted of felonies.

An association of doctors threatened to carry out “a general strike” of angry doctors across the country if the bill is put to a full-floor vote at the National Assembly, while the government warned of stern actions if the strike is launched, especially as national COVID-19 vaccinations are set to begin later this week.

The two sides last clashed when thousands of trainee doctors staged a strike for weeks between August and September to protest the government plan to increase admission quotas at medical schools.

They ended the strike after the government promised to suspend the reform plan on concerns that the prolonged collective action could disrupt the health care system as coronavirus infections continued to grow.

The bill to revise the Medical Service Act, proposed by lawmakers of the ruling Democratic Party (DP), passed through the National Assembly’s Health and Welfare Committee last Friday.

The DP, which commands a majority at the assembly, is planning to push the bill through the Legislation and Judiciary Committee and then a plenary parliamentary session slated for Friday.

The revision, if enacted, would enable the revocation of the medical license of doctors who are given an imprisonment or worse sentence for committing serious crimes, such as murder or rape, for up to five years.

Those who are sentenced to imprisonment will be eligible for the renewal of their medial licenses only five years after the terms are served, while those serving a suspended prison sentence can do so after two years.

Any convictions related to medical malpractice are exempt from the proposed license revocation.

The proposal also allows the revocation of a medical license acquired through unjust means. 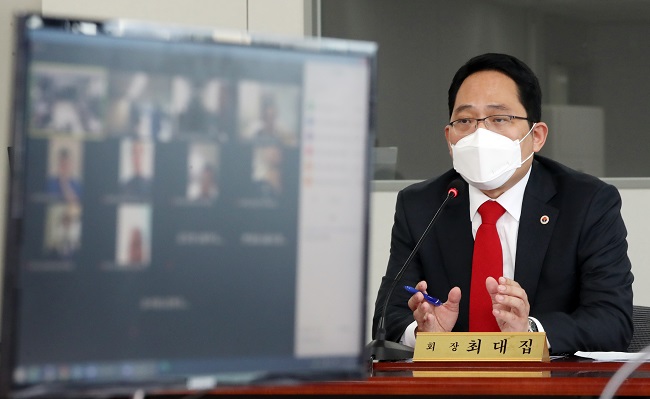 Choi Dae-zip, the president of the Korean Medical Association, speaks during a meeting on Feb. 20, 2021. (Yonhap)

Doctors are fiercely protesting the bill, which they say is “too harsh” and encroaches on their freedom to practice their profession.

The Korean Medical Association (KMA), the country’s biggest doctors’ association representing some 130,000 practitioners, is adamant that it will go on a general strike if the bill is passed by the parliamentary judiciary committee, the last legislative gateway to the final general session voting on the bill.

“If the revision bill passes through the judiciary committee, (the association) will have no other choice but to go on a general strike nationwide,” Choi Dae-zip, the president of KMA, said.

He also claimed that the strike will break down the cooperative relationship between the government and the medical sector regarding the fight against COVID-19 and likely cause “major disruption” to the country’s handling of COVID-19 patients, as well as the pending national vaccination program.

South Korea is set to kick off its public COVID-19 vaccination program Friday, starting with staff members and patients under the age of 65 at infection-prone long-term care hospitals for seniors, rehabilitation facilities and sanatoriums across the country.

The government plans to finish inoculating 70 percent of the public by September and attain herd immunity by November.

The government and the ruling party immediately took a swipe at the association’s threat of a collective action that came just days before the start of the vaccination campaign, vowing to take stern actions if the strike is launched.

“Interests of a particular industry can never precede life and safety of the people,” Prime Minister Chung Sye-kyun said during a government meeting on the COVID-19 response Sunday.

“If the KMA stages an illegal group action, the government will respond sternly.”

DP Chairman Rep. Lee Nak-yon chimed in, stating during a party meeting Monday “such an attitude by the doctors’ association, which is supposed to have higher standards of ethics and social responsibility, may greatly disappoint the public.” 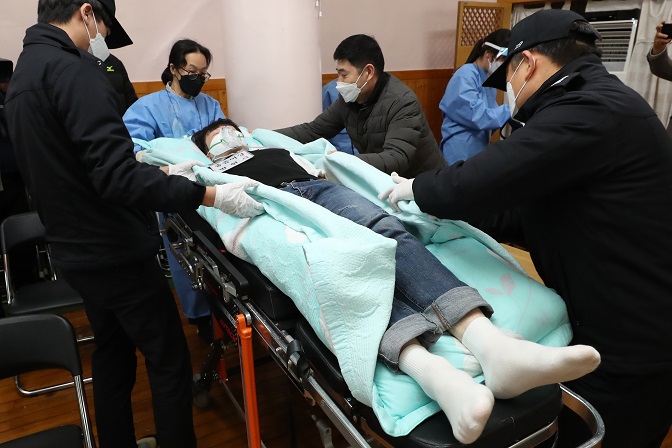 A mock training exercise for COVID-19 vaccinations is in progress at a care facility in Gwangju, South Jeolla Province, on Feb. 23, 2021. (Yonhap)

Many lawmakers are taking it as an “illegal privilege” for doctors to remain immune to the revocation of their professional licenses even after being convicted of serious crimes, especially amid a steady growth in criminal cases involving doctors.

A police report showed 2,867 doctors were convicted of felonies during a recent five-year period, registering a steady rise from the past.

Under the current law, other licensed professionals, such as lawyers and accountants, as well as lawmakers, are subject to the revocation of their qualifications when they are sentenced to imprisonment or worse punishments.

By contrast, medical licenses are only subject to withdrawal when a practitioner is convicted of providing an illegal abortion, lending his or her license, issuing a false medical certificate or committing other illegal acts while practicing medicine, under the current act.

DP Rep. Kim Sung-joo, an executive secretary at the parliamentary health committee, said the proposed bill only aims to equalize the level of disciplinary measures across all licensed professions.

“We (proposed) an equal enactment, which is neither excessive nor scant,” Kim noted.

Another DP lawmaker, Rep. Jang Kyung-tae, wrote on his Facebook account, “The illegal privilege remaining only for doctors needs to be abolished.”

“It is nothing more than a distorted sense of entitlement and elitism,” Rep. Kang Eun-mi of the minor party said Monday. “The public is enraged by (their) abuse of power that threatens the dignity of patients and the value of their lives.”