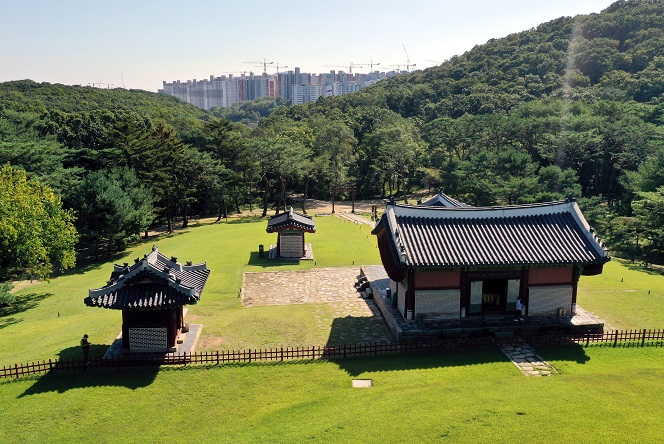 An apartment complex under construction is seen from a distance at Jangneung in Gimpo, west of Seoul, on Sept. 30, 2021, spoiling its view. The work is under harsh criticism, as Jangneung is the place for the tombs of the parents of King Injo, the 16th ruler of the Joseon Dynasty, who were posthumously granted the royal titles of King Wonjong (1580-1619) and Queen Inheon (1578-1626), and a UNESCO World Heritage site. (Yonhap)

SEOUL, Dec. 17 (Korea Bizwire) — Conflicts are flaring up over new apartment complexes that are being built within the cultural heritage conservation area around a site of royal tombs from the Joseon Dynasty in Gimpo, west of Seoul.

The Cultural Heritage Administration (CHA) issued a work suspension order for the construction of the apartment complexes near the tombs in Seo District, Incheon, saying that they are being built without appropriate approval.

Angered by the order, however, the prospective residents of the apartment complexes decided to report the administration’s current and two former heads to the Incheon Seobu Police Station, claiming that they should be held accountable for delinquency of duties.

The prospective resident council insisted that when the CHA issued a notice on the need for construction companies to go through a deliberation process if they built a building with a height of 20-plus meters in the historic cultural environment conservation area that is 500 meters away from Jangreung site in Jan. 2017, it didn’t directly inform related authorities, thereby causing confusion for all parties involved.

Jangreung is designated as historical site No. 202 and is one of 40 royal tombs of the Joseon Dynasty that were listed as UNESCO World Heritage Sites.

Without being aware of the notice, construction companies started building the apartment complexes without going through the CHA’s deliberation process, based on their belief that the cultural heritage-related issue was addressed in the planning stages of the new development.

The Seo District Office also claimed that it approved the apartment construction project since the CHA hadn’t informed local officials of the notice.

In contrast, the CHA stressed that the notice took effect simply by being published in the official gazette and construction companies should have sought approval for the change of the present condition for cultural heritages before starting construction.

Prior to this, the CHA ordered construction to be suspended for 19 out of 44 apartment buildings with a total of 3,400 units being built by three construction companies, saying that they were being built without appropriate approval.