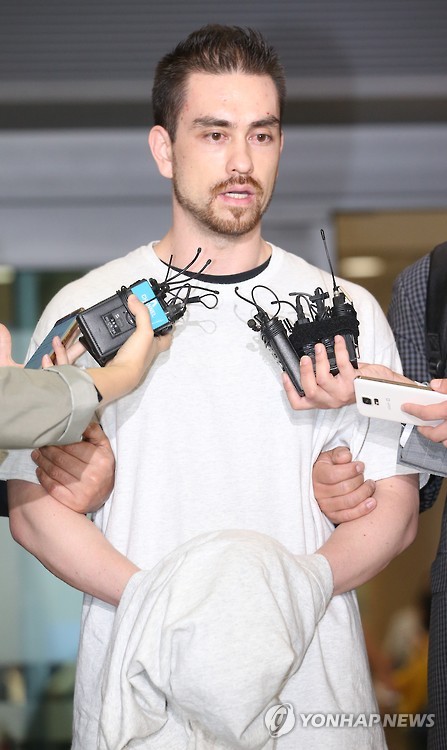 Arthur Patterson accused of murdering a South Korean college student in 1997 speaks to reporters after being extradited to South Korea at Incheon airport, west of Seoul, on Sept. 23, 2015. (image: Yonhap)

SEOUL, Sept. 13 (Korea Bizwire) – An appeals court on Tuesday convicted a U.S. citizen accused of murdering a South Korean college student in 1997, delivering a 20-year prison term that is the severest penalty possible for the defendant who was then an adolescent.

Upholding a lower court’s decision, the Seoul High Court found Arthur Patterson guilty of stabbing Cho Joong-pil, who was then a college student, multiple times at a Burger King in the popular foreigner district of Itaewon in central Seoul 19 years ago.

“The defendant lived 19 years of life that the victim was deprived of but still did not show any attitude of seeking pardon from the victim or the bereaved family,” the court said.

The 36-year-old defendant has been denying the charges and pointed to the Korean-American named Edward Lee, who he was with at the site of the homicide, as the culprit.

Though Lee was acknowledged as an accomplice, he cannot be punished due to the prohibition against double jeopardy.

A local court found Lee guilty of murder and sentenced him to life in prison in 1998, but he was acquitted by the Supreme Court the following year on a lack of evidence.

At the time, the half-Korean Patterson was in Seoul as the dependent of a civilian worker with the U.S. military. He fled the country in 1999.

His departure was possible because law enforcement authorities failed to extend his foreign travel ban.

Patterson was indicted for murder in December 2011 and was extradited to South Korea in September 2015.