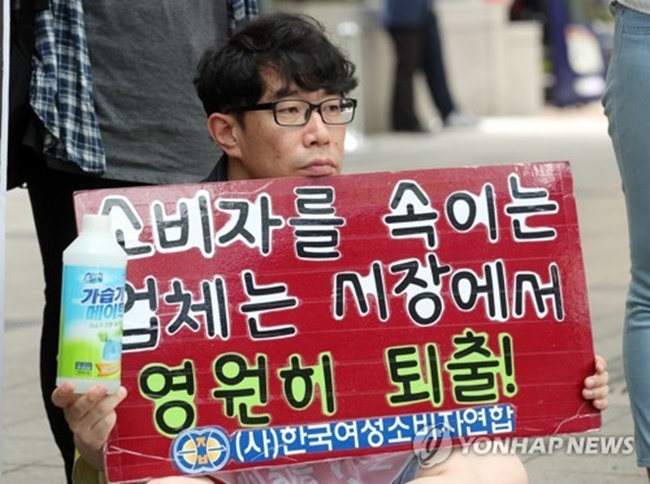 This photo, taken on June 26, 2017, shows a member of a civic group calling for a probe into a toxic humidifier disinfectant scandal in Seoul. (Image: Yonhap)

The Seoul Eastern District Court slapped SK Chemicals Co. and other firms with fines of up to 30 million won (US$26,450) for distributing polyhexamethylene guanidine, a toxic substance also known as PHMG. The government has restricted its use for some household products since 2012.

The court also meted out suspended jail terms to several officials at the firms for selling the substance without state permission or registration.

“The guilt is heavy for making it difficult for the state to control the toxic substance,” Kim Jin-hwan, the judge, said in his ruling, referring to an SK Chemicals official accused of distributing PHMG.

The humidifier disinfectant scandal, one of the worst scandals, involving chemical consumer products, came to light after four pregnant women died of lung problems in 2011. A government-led probe later confirmed a correlation between the victims’ health problems and the chemicals used to clean household humidifiers.