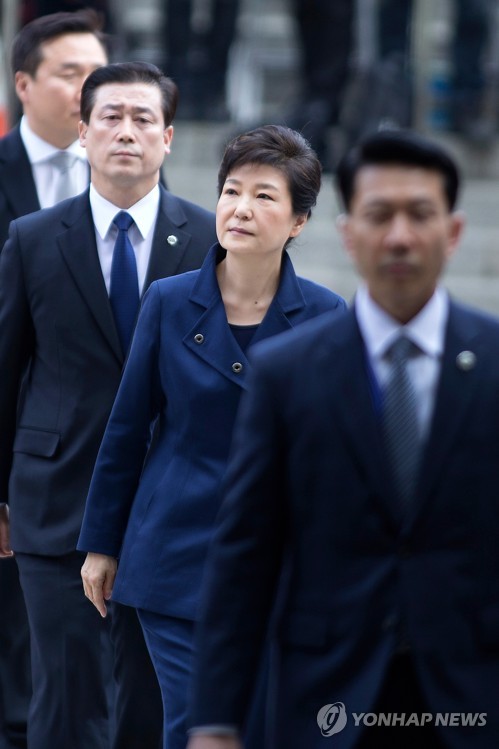 Former President Park Geun-hye arrives at the Seoul Central District Court in the capital on March 30, 2017, to attend a hearing on whether to issue a warrant to formally arrest her. (image: Yonhap)

SEOUL, March 30 (Korea Bizwire) – A Seoul court held a hearing Thursday to decide whether to issue an arrest warrant for former President Park Geun-hye over a string of corruption allegations that removed her from office.

The former president appeared at the Seoul Central District Court at around 10:20 a.m. to attend the review session. The result is likely to come out late at night or early the next morning.

She declined to comment on any of the questions asked by reporters as she arrived at the courthouse in southern Seoul.

Police bolstered security near the courthouse, mobilizing some 2,000 officers for contingencies, as supporters and opponents of Park held rallies.

Pro-Park protesters who waited outside her private residence waved national flags as she left home. Some of them were restricted while attempting to prevent the car carrying Park from heading to the courthouse.

State prosecutors filed the request on Monday to detain Park on charges of bribery, abuse of authority, coercion and leaking government secrets, citing the graveness of the alleged crimes and the possibility of the destruction of evidence.

Prosecutors suspect Park colluded with her longtime friend Choi Soon-sil to force dozens of local conglomerates to “donate” a total of 77.4 billion won (US$70 million) to two dubious foundations — Mir and K-Sports — allegedly controlled by Choi.

Samsung’s de facto leader Lee Jae-yong was arrested for giving or promising some 43.4 billion won to Choi, and in effect to Park, as kickbacks in return for business favors. Of the total, 20.4 billion won went to the two foundations.

If convicted of the bribery charges, Park can be sentenced to 10 years or more in prison.

Park is also accused of involvement in blacklisting cultural figures deemed critical of her policies and prohibiting government agencies from providing financial support to them. Her former close aides were arrested for their roles in creating and managing the list of more than 9,000 artists, writers, filmmakers and entertainment figures.

Prosecutors suspect that the former president abused her power by pressuring her aides to sack culture ministry officials who resisted discriminatory measures against those on the blacklist.

She is also accused of unlawfully intervening in the corporate management of conglomerates, including Hyundai Motor, POSCO and KT, by pressuring them into signing contracts with Choi’s firms.

During a marathon interrogation session at the prosecution on Tuesday last week, Park reportedly denied all allegations against her.

If the court issues the writ, Park will be transferred to a detention center south of Seoul, as the country’s third former president to be arrested for criminal allegations following Roh Tae-woo and Chun Doo-hwan.

She vacated the presidential office Cheong Wa Dae earlier this month after the Constitutional Court removed her from office in a historic ruling on March 10.