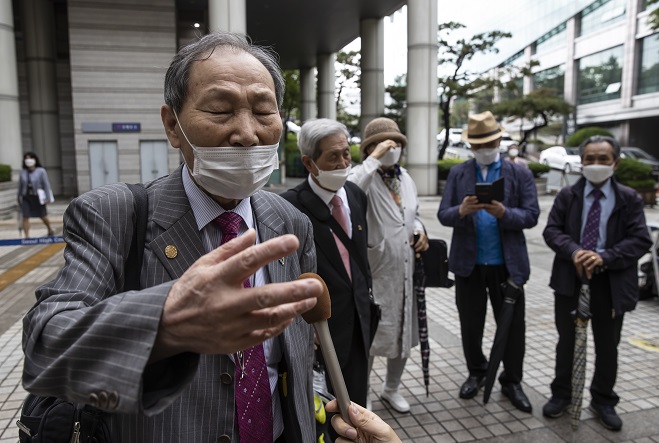 South Korean victims of wartime forced labor in Japan speak to reporters after attending a hearing at the Seoul Central District Court in Seoul on May 28, 2021. (Yonhap)

This case is the largest among many similar lawsuits filed by South Korean victims of wartime forced labor in Japan. At first, 17 Japanese firms were sued but the plaintiffs dropped their suit against one of them.

Dismissal is a decision made without any trial due to the absence of litigation requirements. It can be viewed as tantamount to a ruling against the plaintiffs.

Referring to the 1965 agreement between Seoul and Tokyo on resolving colonial-era issues, the court said, “It cannot be said that individual claims are terminated or waived due to the Korea-Japan treaty. But it was decided that the individual rights cannot be exercised through lawsuits.”

Japan has claimed that all colonial-era issues, including individual compensation, were resolved with the 1965 treaty.

The court said forced labor victims’ individual compensation rights are covered by the Korea-Japan treaty considering treaty-related documents, the circumstances leading to the treaty, purported intentions of the concerned parties, and their follow-up measures.

“An acceptance of the plaintiffs’ claim in this case may result in a violation of international law, including Article 27 of the Vienna Convention,” the court said, adding that nonobservance of treaties cannot be justified by an invocation of internal laws that recognize the illegality of colonial rule.

The court also said in a written judgment that if it accepts the plaintiffs’ request, its decision will be tried by the International Court of Justice (ICJ) as Japan will file a complaint against the decision with ICJ.

If South Korea loses the case, trust in its judiciary will be tarnished, the court said.

The latest court ruling is in sharp contrast to an October 2018 ruling from the Supreme Court, which upheld an appeals court ruling in 2013 that ordered Nippon Steel to pay each of four Korean plaintiffs 100 million won (US$87,720) in compensation for their wartime forced labor and unpaid work. 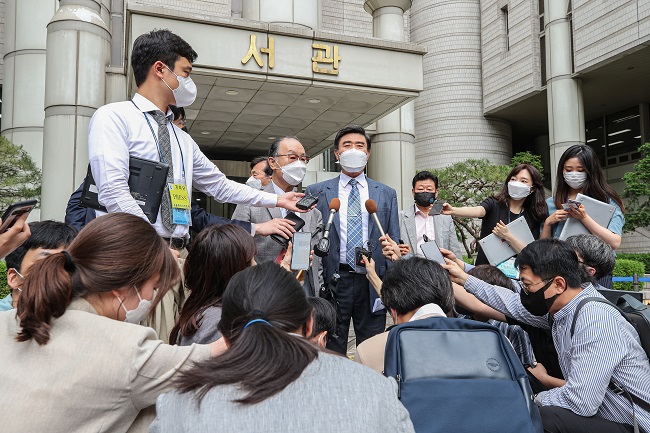 Representatives of South Korean wartime forced laborers speak to reporters at the Seoul Central District Court on June 7, 2021, after the court rejected their damages suit against Japanese companies. (Yonhap)

Lawyers for the plaintiffs criticized the district court ruling as “very unfair” and vowed to appeal.

Lim Cheol-ho, an 85-year-old plaintiff whose father was allegedly conscripted to work in Japan, condemned the court ruling as “pathetic.”

“Is the judge a Korean national? Is it a Korean court? The ruling is deplorable and I can hardly open my mouth to speak on it,” Lim said.

According to government data, more than 1 million Koreans were conscripted to work for Japanese companies and its military during World War II. Korea was under Japan’s brutal colonial rule from 1910-45.

The damages suit was filed in May 2015, but the first hearing was held six years later last month due to delayed delivery of court documents and other problems.

Japanese companies did not take any action at first but appointed a Korean lawyer as their representative after the court decided on the public notice of the litigation.

The court had originally planned to hold the sentencing hearing on Thursday but suddenly decided to advance the schedule.

After the announcement of the court’s ruling, 15 local civic groups, including Lawyers for a Democratic Society (MINBYUN), said in a joint statement that the court made an unfair judgment.

Citing the court’s grounds for judgment, such as the possible fallout of the international legal dispute, they said that these should not be areas considered for judicial judgment.

The civic groups claimed that if things are not changed, the court’s ruling should be made on the basis of the October 2018 ruling from the Supreme Court.