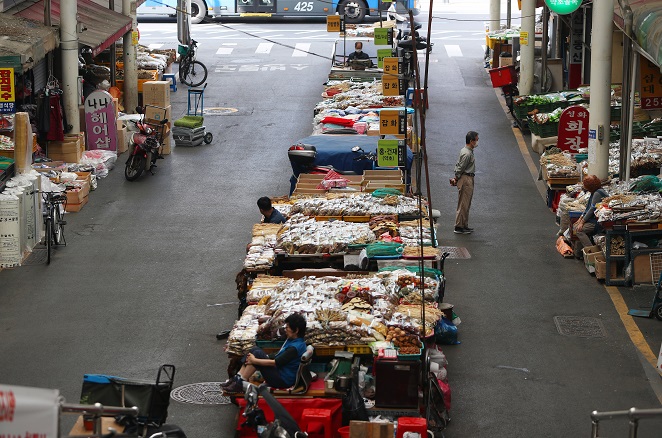 Seomun Market, the largest traditional market in Daegu, southeastern South Korea, remains empty of shoppers on the afternoon of Sept. 22, 2020, despite the approach of the Chuseok holiday. (Yonhap)

SEOUL, Sept. 23 (Korea Bizwire) — Chuseok, the Korean version of Thanksgiving, used to be by far the biggest shopping season for traditional markets nationwide, with marketplaces bustling with shoppers buying groceries for ancestral memorial rites, holiday dishes to share with families, and gifts for relatives and business partners.

In recent years, the growing popularity of online shopping malls and large discount stores has gradually eaten into the Chuseok sales of traditional markets.

This year, the spread of the coronavirus outbreak appears to be making things much tougher for traditional market merchants.

Vendors in Daegu’s Seomun Market, one of the largest in the southeastern city, are complaining of a some 70 percent decline in Chuseok sales.

The sharp dip in holiday shoppers and sales was already anticipated, as a recent Gallup Korea poll showed over 80 percent of adults nationwide are unwilling to visit their hometowns or travel during the extended three-day Chuseok holiday that runs from Wednesday to Friday amid lingering coronavirus fears.

Authorities have also discouraged hometown visits or travels, fearing that a massive population movement during Chuseok might pave the way for the further spread of COVID-19.

“A holiday sales boom? Where is it? Look, it’s very quiet. Not a single customer has visited my place today so far,” a 50-something woman who runs a “hanbok” (traditional Korean dress) shop at Seomun Market replied Tuesday, when asked about Chuseok sales.

The woman said she skipped lunch to wait for customers as she hadn’t sold a single item.

“Chuseok is the most important time of the year (for traditional markets). But sales appear to have fallen about 70 percent this year,” she sighed. 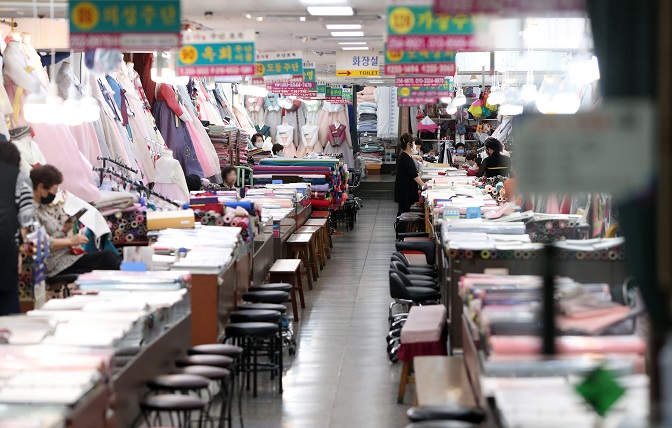 Shoppers are scarce at a mall of “hanbok” stores within Seomun Market, the largest traditional market in Daegu, southeastern South Korea, on Sept. 22, 2020, despite the approach of the Chuseok holiday. (Yonhap)

In the middle of the near-empty market in central Daegu, a vendor was heard shouting, “All ceramic vessels for 1,000 won (US$0.86) a piece.”

One shoe store owner said he may go bankrupt next week if his sales remain poor throughout this week.

The situation was not very different at Nambu Market in Jeonju, about 250 kilometers south of Seoul.

Merchants wearing masks were busy displaying fruits, fish and other goods neatly, but customers were scarce. In previous years, the market was crowded with customers with shopping baskets in both hands.

“The most common thing I hear from regulars is, ‘There is no one coming home to visit during Chuseok so I’ll only buy a few things,’” a 60-something vegetable store owner said.

“It seems consumers hesitate even more because it exceptionally rained a lot this summer, pushing up vegetable prices. I was hoping that Chuseok would improve the situation, but there has not been much difference in sales despite the approach of Chuseok,” the owner lamented.

Another Nambu Market merchant said there are many fellow vendors who say things are terrible this year compared with the previous holidays.

“A holiday atmosphere appears to be missing, as (authorities) are emphasizing non-face-to-face transactions, though traditional markets are centered on face-to-face trade,” he said. 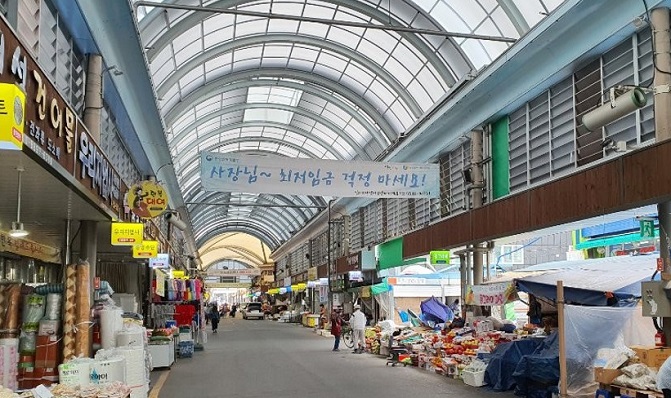 With the Chuseok holiday just a week away, shoppers can hardly be seen at Joongang Market in Jeonju, southwestern South Korea, on Sept. 22, 2020. (Yonhap)

The owner of a fish store at Bujeon Market in Busan, the southern port city, sighed when asked about Chuseok sales.

“Last year, customers lined up to buy fish. But this year, I’m now spending time looking at my smartphone. Sales have been further devastated because family members have been told not to gather and dine together due to coronavirus fears,” he said.

A stream of holiday shoppers used to be a signature sight at Bujeon Market, but such an atmosphere can hardly be seen this year, though the situation is said to be slightly better there than at other traditional markets.

A clothing store owner also said she has never seen such an absence of market customers in her entire business life stretching over 40 years.

“Because of the coronavirus fears, people tend to buy only what they need at nearby discount stores and have them delivered to their homes, dealing a blow to traditional markets,” the store owner said.

The situation is far worse at Seongnam’s Moran Market, one of the nation’s largest traditional markets located on the southern outskirts of Seoul, as it has been frequently forced to close at the recommendation of quarantine authorities.

Moran Market, which meets every five days, was closed seven times from Aug. 18 to Sept. 19, in accordance with the government’s social distancing guidelines.

Moran merchants are now demanding a full-fledged reopening of the market, though Seongnam’s municipal authorities have proposed a conditional reopening under which only takeaway for food items is permitted.