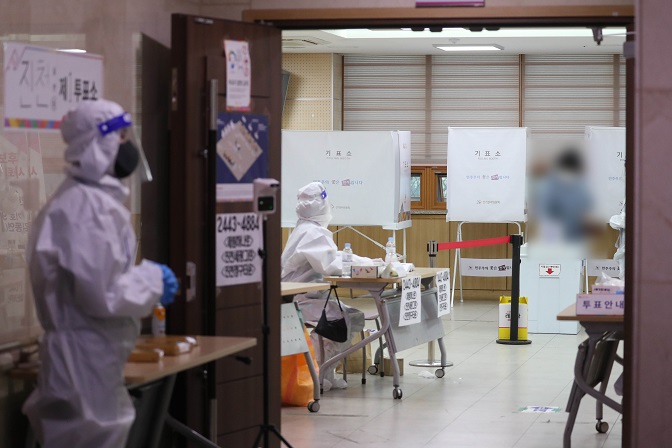 This file photo shows a polling station prepared for COVID-19 patients in Daegu, about 300 kilometers southeast of Seoul, during the presidential election on March 9, 2022. (Yonhap)

SEOUL, May 20 (Korea Bizwire) — COVID-19 patients will be able to vote in the June 1 local elections and parliamentary by-elections at the same polling stations as uninfected voters after the regular voting session is over, the state election watchdog said Friday.

Virus patients will not be allowed to vote on the first day of early voting.

In the March 9 presidential election, virus patients were only allowed to use the official polling stations on Election Day and had to cast their ballots at separate stations during the early voting period.

The change was made in reflection of criticism that ballot boxes at polling stations for patients were mishandled during the presidential election.

A total of 17 posts for metropolitan mayors and provincial governors, 226 heads of lower-level administrative units and 779 seats in provincial and metropolitan councils, as well as seven parliamentary seats are up for grabs in the upcoming elections.