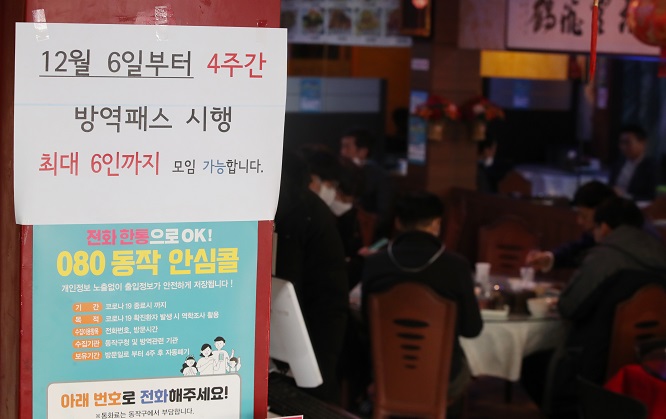 A notice posted at the entrance of a Chinese restaurant in Seoul on Dec. 3, 2021, says a customer is required to show proof of vaccination or a negative test for entry and gatherings of up to six people are allowed starting Dec. 6. (Yonhap)

SEOUL, Dec. 3 (Korea Bizwire) — South Korea’s daily coronavirus cases fell below 5,000 on Friday, but the number of critically ill patients hit yet another record high as the country prepares to limit private gatherings amid growing concerns over the new omicron variant.

The country also reported what could be the first cluster outbreak of the omicron variant at a church after the government confirmed the first six cases of omicron infection in the country this week.

The country reported 4,944 new COVID-19 cases, including 4,923 local infections, raising the total caseload to 462,555, according to the Korea Disease Control and Prevention Agency (KDCA).

The number of critically ill patients came to 736, up from the previous record high of 733 on Thursday.

Friday’s tally is down from 5,266 counted the previous day, which marked an all-time high since the country reported the first COVID-19 case in January last year. The daily cases had stayed above 5,000 for two consecutive days.

Health authorities and local governments had reported 4,227 new cases as of 9 p.m., up 170 from the same time the previous day. Daily cases are counted until midnight and announced the following morning.

The KDCA said contact tracing was under way to test at least over 400 members at a church in Incheon, west of Seoul, to determine if the infections amount to a cluster outbreak.

A pastor couple and their friend — a Uzbek national who drove the couple home in a private vehicle from an airport upon their return from Nigeria — tested positive for the omicron variant Wednesday.

The couple lied to health authorities that they took one of the officially designated infection-proof “quarantine” taxies to return home from Incheon International Airport on Nov. 24.

The Uzbek national moved around without any restrictions for several days, coming into contact with 87 people, including family, friends and co-workers, and putting them at risk of COVID-19 infection.

Officials said they were carrying out the genetic sequencing analysis on at least four more suspected omicron cases. 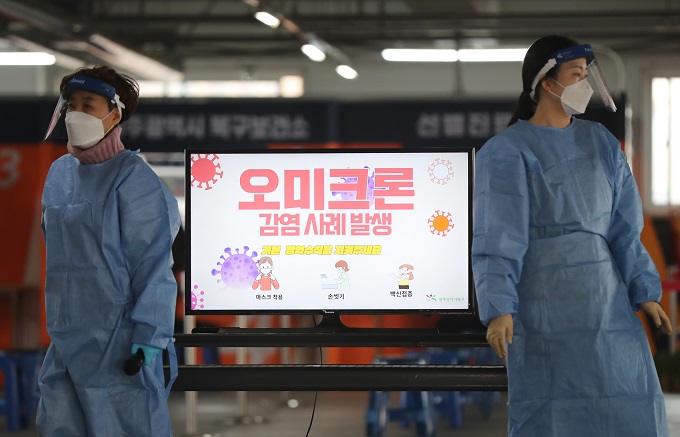 A sign warns of the spread of the omicron coronavirus variant at a COVID-19 testing station in Gwangju, 330 kilometers south of Seoul, on Dec. 3, 2021. (Yonhap)

The emergence of the potentially more transmissible variant is a setback to South Korea’s efforts to return to normalcy with a gradual easing of virus restrictions under the “living with COVID-19″ scheme that began last month.

Health authorities note that the number of critically ill patients, mostly the elderly, is growing fast, sparking concerns that the country’s medical system could reach its limit.

As of 5 p.m. Thursday, 79.2 percent of intensive care units were occupied across the country. The percentage for Seoul was at 89.9 percent.

A one-week grace period will be allowed before enforcing the rules. Exceptions will be applied for unvaccinated visitors using the facility alone.

“With the measures, we temporarily halt the recovery scheme and will determine whether we can move forward with the next phase of the scheme as we try to stably manage the trend,” Health Minister Kwon Deuk-cheol said in a press briefing on virus response measures.

He said the effects of the tougher virus curbs will start to show after a couple of weeks.

Teenagers aged between 12 and 17 will need to present the vaccine pass for entry into these facilities, starting in February next year, given that the vaccination rate among the age group is still low.

Prime Minister Kim Boo-kyum stressed the need for people, particularly the elderly and adolescents, to receive the vaccine shots, saying vaccines are the most “reassuring barrier that can block COVID-19″ and those age groups hold the key to stemming the virus curve.

The country had planned to further relax the virus curbs later this month, but the government decided to put the scheme on hold, citing the high risks of the pandemic and variant concerns.

Beginning Friday, all international arrivals are required to undergo a mandatory quarantine for 10 days for the next two weeks, regardless of whether they are vaccinated.

About 3.57 million people, or 7 percent of the population, have received a booster shot.