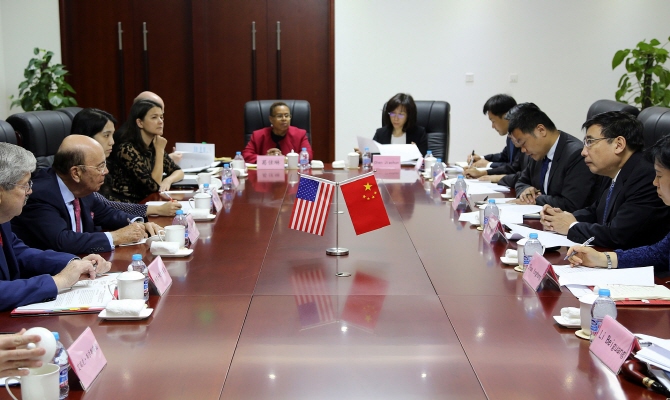 HONG KONG, CHINA, Feb. 14 (Korea Bizwire) - There is growing uncertainty about how recent trade disputes between the United States and China will be resolved – and how it could affect the rest of the world.

However, academics from The Chinese University of Hong Kong (CUHK) Business School, City University of New York, and the University of Texas at Dallas in the United States – who previously looked at the two countries’ global trading history and relationship – believe they can provide valuable insights into the possible outcome.

In November 2018, the trade dispute was halted – at least for 90 days – to allow for more talks. China’s President Xi Jinping and U.S. President Donald Trump agreed to the move on December 1 in Buenos Aires – at the end of the G20 summit of leaders and central bank governors from 19 countries and the European Union – in their first talks since the trade dispute started. Representatives from the two nations held two days of talks at the end of January 2019, with the United States side saying they were considering a trip to Beijing in early February, after the Lunar New Year, to resume negotiations. However, the trip was ruled out by Donald Trump.

The halt to the dispute came after G20 leaders agreed a joint declaration that noted international trade divisions – including one between Beijing and Washington involving intellectual property rights (IPR).

“Given the scope and scale of potential IPR violations in China, the U.S. has frequently sought better IPR protection in China and has been frustrated by the lack of progress, in spite of recent improvements,” said David Ahlstrom, Professor of Department of Management at CUHK Business School, referring to his study entitled History and the Debate Over Intellectual Property.

Prof. Ahlstrom has been named by the Clarivate Analytics list of Highly Cited Researchers 2018 as one of the world’s top researchers who has demonstrated significant influence by publication of multiple highly cited papers during the last decade from 2006-2016.

He and his co-authors of the paper, Prof. Mike W. Peng and Prof. Shawn M. Carraher, both of the University of Texas at Dallas, and Prof. Weilei (Stone) Shi of City University of New York believe the key to predicting the future development of IPR lies in a deeper understanding of the history of U.S. IPR development, which reveals interesting historical parallels with the current situation in China.

For more than 100 years, between the founding of the United States in 1776 and the enactment of the Chace Act in 1891 – which gave U.S. copyright protection to citizens of other countries and a similar degree of protection to U.S. citizens – the pirating of British and foreign publications, such as books, and entertainment, such as stage plays, was widely practiced by numerous Americans.

The United States, with its lower levels of literary and economic development, was slow to introduce the protection of foreign IPR because it knew the potential benefits would simply go to foreign inventors, authors and firms, such as British publishers, while domestic consumers would face higher costs for books, media products and innovative goods.

Even U.S. author Edgar Allan Poe got involved, copying works of British authors for his coauthored 1839 textbook on molluscs. And it was the only book that Poe made much money on in his lifetime.

“Such plagiarism was quickly discovered,” he said. “Poe admitted as much in his own writings, but with no international copyright agreement, the original British publisher had no recourse.”

Prof. Ahlstrom said China’s current IPR laws were generally well-crafted and had pushed a lot of IPR violation underground. But enforcement is weak.

“Thousands of firms and tens of thousands of individuals have made rational decisions – from their standpoint at least – to engage in piracy and counterfeiting,” he said.

Even for proven violations, current Chinese law generally imposes a maximum fine of one million yuan (US$160,000); however, the average award is only 190,000 yuan (US$30,000) – hardly enough to deter violations and that may not even cover legal costs.

Beijing’s reluctance to increase the maximum fine for IPR violations may be the result of concerns that, at this relatively early stage of China’s development, satisfying U.S. IPR demands may result in foreign – and primarily U.S. – IP rights holders benefiting more: In short, costs may exceed benefits.

“An institution-based view of IPR history suggests that both the U.S. refusal to protect foreign IPR in the 19th century and the current Chinese lack of enthusiasm to meet U.S. IPR demands represent rational choices.”

“However, as cost-benefit considerations change institutional transitions are possible,” as Prof. Mike Peng has written extensively about.

Back in late 19th century America, pressure for change came from numerous inventors, authors, and organizations, who were keen to market their products abroad, but knew they would get better IPR protection from foreign governments only if Washington offered equivalent protection to foreign IP rights holders in the U.S.

Prof. Ahlstrom said research showed that it was only when the U.S. economy was taking off, and its IP production was extensive enough, that it felt could extend IPR protection to foreigners.

Given the domestic and international complaints about the lack of IPR expertise among judges, China has also set up a system of specialised IP courts led by judges specifically trained in IPR enforcement.

As a result, IPR litigation has skyrocketed, with China now the world’s most litigious IPR nation, in terms of the number of cases.

This change is thanks to foreign pressure, greater invention by firms and citizens, and the gradual public recognition of the wider cost benefits of stronger IPR protection; both the Chinese government and businesses realize that more sustained economic growth will increasingly need to draw on IPR.

As inventive capacity emerges, competition remains based on imitation, so most economic and political interests prefer weak IPR protection.

Yet when an economy develops further, additional inventive capacity and demands for high-quality products emerge, and commercial lobbies demand effective protection – a domestic interest that coincides with the foreign interest in better IPR protection.

He said that U.S. businesses now complaining about IPR violations in China could also learn how British authors, composers and firms dealt with American counterfeiters over 100 years ago. For example, British composers Gilbert and Sullivan brought their entire troupe to New York to perform the comic opera The Pirates of Penzance – wrong-footing the copycats who had paid no royalties when performing their earlier hit, HMS Pinafore.

In contemporary China, many multinationals had adapted to Beijing’s IPR system by using a Gilbert-and-Sullivan-style pre-emptive strategy, he said.

Specifically, they file patents and trademarks – including Chinese language trademarks – as soon as possible, or set up strategic alliances with dependable Chinese partners right away, which make major patent infringement more difficult.

Prof. Ahlstrom said showing how the U.S. has transformed itself into a leading IPR champion could throw light on the current US-China debate on IPR.

“We predict that to the same extent that the U.S. voluntarily agreed to strengthen IPR protection when the U.S. economy became sufficiently innovation-driven, so China will similarly enhance its IPR protection,” he said.

“We further predict that when Chinese IPR are significantly violated abroad, China will become more serious about IPR protection. Therefore, we suggest that China’s domestic innovation policies need to be strengthened instead of discouraged by foreign IP rights holders, governments, and other stakeholders.”