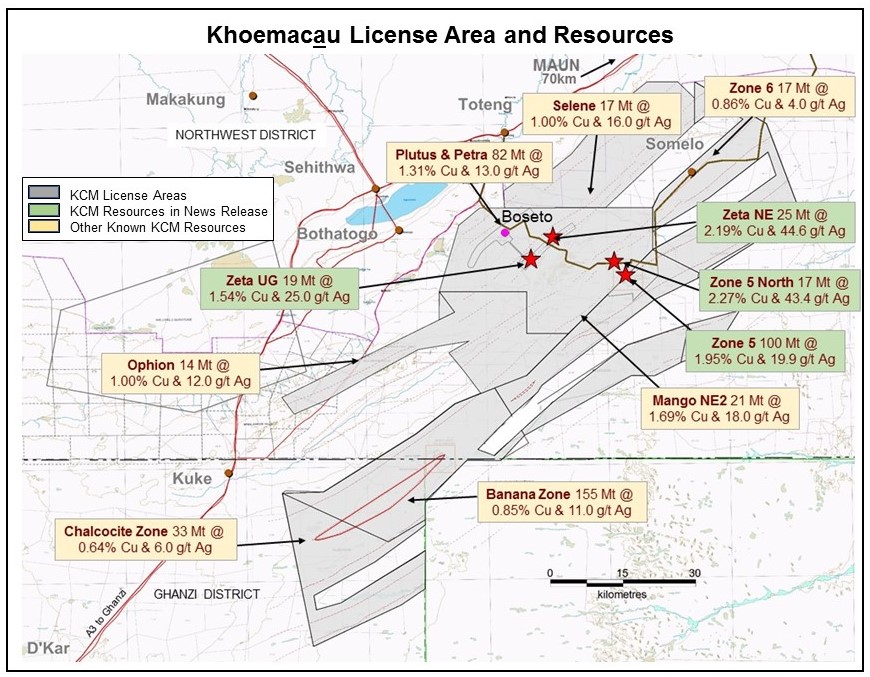 SCOTTSDALE, AZ, Feb, 27, 2017 (Korea Bizwire) – Cupric Canyon Capital (“Cupric”) is pleased to announce that its wholly owned subsidiary, Khoemacau Copper Mining Pty. Limited (“KCM”), has entered into a $50 million, term loan facility agreement with Red Kite Mine Finance to provide funding for KCM’s Khoemacau copper-silver project in Botswana. Proceeds from the loan will be used to fund project development costs and front end engineering in advance of commencing full scale construction in the second half of 2017

KCM will construct an underground mine at its high-grade Zone 5 deposit. The Zone 5 resource contains 100 million tonnes of ore grading 2% copper and 20 g/t silver as reported in November 2015. The Zone 5 mine will initially feed the near-by Boseto copper concentrator, which was acquired as part of Cupric’s purchase of Discovery Copper Botswana (“DCB”) announced in July 2015. The Zone 5 underground mine will be accessed with three declines and will utilize a highly-mechanized, low-cost sub-level open stoping mining method. The Boseto concentrator will be upgraded from its current 3.0 million tonnes per annum nameplate capacity to 3.6 million tonnes per annum. Metal production from the Starter Project will average 50,000 tonnes of copper and 1.4 million ounces of silver per annum. The Zone 5 mine is expected to have a minimum life of 25 years and average C1 cash costs of c. $1.00 per pound.

The total cost to develop KCM’s Starter Project is c. US$350 million, with underground mine development being the largest single cost component. Efforts are underway to optimize both ore grade and capital expenditures. Within the next few months, the Botswana Environmental Ministry is expected to approve modifications to KCM’s environmental permits to facilitate processing Zone 5 ore at the upgraded Boseto plant. The Botswana Power Company is also progressing development of the high-tension power line that will provide commercial power to the northwest region of Botswana. This power-line project includes a spur line to Boseto and Zone 5, providing low-cost commercial power when KCM starts production in 2019.

Dennis Bartlett, Cupric’s Chief Executive Officer, said: “Proceeds from the term loan will enable us to continue development work at Khoemacau as we prepare to begin full scale construction of the Starter Project in the second half of 2017. All design, engineering and permitting work is progressing well and on schedule, bolstering our confidence that production will commence in 2019. In addition, the most recent drilling results including the discovery of Zone 5 North and mineral resource updates for the deposits acquired last year are very exciting. We continue to believe that Zone 5, combined with the expansion potential offered by the other deposits within our license areas, represents perhaps the most attractive new copper project in the world today, with the potential to ultimately achieve copper production in excess of 120,000 tonnes per annum.”

Following Cupric’s 2015 acquisition of the adjacent Boseto property, KCM began drilling the high-grade Zeta NE deposit and started exploration on the acquired prospecting licenses. Deep drilling at Zeta NE included eight diamond core holes totaling approximately 5,561 meters. The results from this drilling confirmed high-grade copper and silver mineralization over thick intervals to a depth of 900 meters below surface with a strike length of three kilometers. The Zeta NE deposit remains open at depth and along strike.

Exploration on the Boseto licenses also resulted in the discovery of the Zone 5 North deposit. Eighteen diamond core holes totaling 7,085 meters and 10 reverse circulation holes totaling 1,594 meters intersected mineralization over a strike length of five kilometers and to a depth of 700 meters below surface. This deposit is still open at depth and along strike.

The results from KCM’s recent drilling and DCB’s previous drilling at Zeta NE were used to develop the following inferred mineral resource estimates for Zeta NE and Zone 5 North. The Zeta NE and Zone 5 North estimates were prepared by RungePincockMinarco (RPM) in 2016. The estimate for Zeta Underground, which represents the resource beneath the Zeta pit that can be mined underground, was prepared by Quantitative Group in 2014. All estimates are classified using JORC Code (2012).

Future expansions are expected to increase production at Khoemacau up to at least 120,000 tonnes per annum of copper. A prefeasibility study with very positive results has been completed for a future concentrator to be built at Zone 5 that will process 6.0 million tonnes and produce an average 80,000 tonnes of copper per annum. Once this new concentrator is built, the Boseto concentrator will process ore mined underground from the nearby Zeta and Zone 5 North deposits. The feasibility study for the new concentrator and definition drilling of the Zeta, Zeta NE and Zone 5 North deposits is expected to commence in 2018.

Cupric was formed in 2010 with a goal to acquire undeveloped copper assets with a known resource. The management of Cupric consists of former executive, technical, financial, and operational leadership of major mining companies, including Phelps Dodge Corporation and its successor, Freeport McMoRan Copper & Gold Inc. (which acquired Phelps Dodge in 2007). The Cupric team has decades of experience in the exploration, development, construction and operation of world-class open pit and underground mines, processing facilities, and infrastructure.