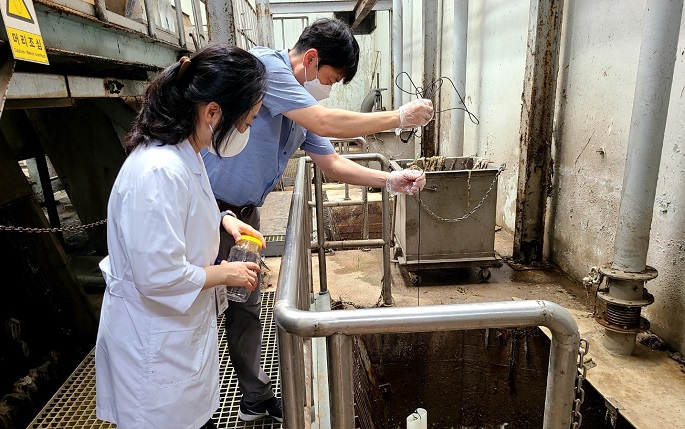 This photo provided by the Daejeon city government shows officials sampling wastewater at a sewage treatment facility in the city.

DAEJEON, Aug. 19 (Korea Bizwire) — Daejeon’s city government said Thursday that it had launched a surveillance system to analyze the sewage produced by households and factories as part of efforts to detect the spread of infectious diseases like COVID-19 as early as possible.

The analysis of virus detection and distribution through the inspection of sewage enables authorities to predict the spread of infectious diseases about one or two weeks faster than the actual spread.

Since the coronavirus outbreak, 65 countries, including the U.S., have used sewage to gauge the spread of the virus. In South Korea, however, the surveillance system was first established last year, led by the Korea Disease Control and Prevention Agency.

The Daejeon Institute of Health and Environment, in collaboration with the city government’s Environment and Green Zone Bureau and Facilities Management Corp., established the surveillance system to detect 10 different types of viruses at sewage treatment facilities, including SARS-CoV-2, the virus that causes COVID-19, and launched the operation of the system from Wednesday.

The city government plans to use the results of the sewage inspection as basic data for the tracing and management of infectious diseases.