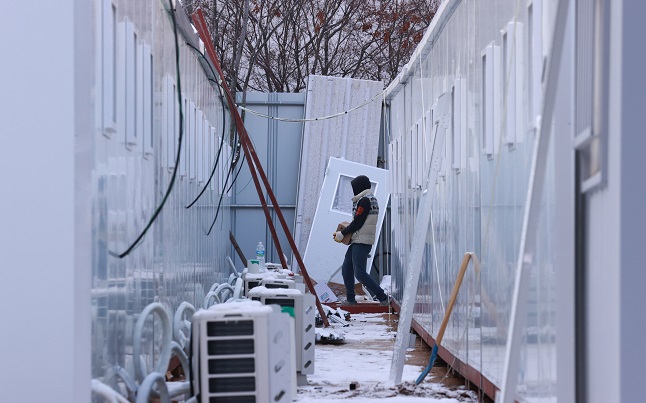 A construction worker builds a container at the Seoul Medical Center on Dec. 13, 2020, as it needs more hospital beds for COVID-19 patients amid a sharp hike in new cases in the Seoul metropolitan area. (Yonhap)

SEOUL, Dec. 13 (Korea Bizwire) — South Korea’s single-day coronavirus cases broke the 1,000-mark for the first time on Sunday, prompting President Moon Jae-in to warn that the country will have to consider enforcing the toughest level of social distancing unless the current spread is curbed.

The country added 1,030 more COVID-19 cases, including 1,002 local infections, raising the total caseload to 42,766, according to the Korea Disease Control and Prevention Agency (KDCA).

Sunday’s daily caseload jumped from the previous day’s record high of 950, marking the highest since the country reported its first COVID-19 case in January.

The number of daily new cases remained around 400 to 600 earlier this month, but it shot up to over 900 on Saturday and broke through 1,000 on Sunday, raising alarm among authorities.

Cluster infections from private gatherings coupled with massive infections at a church and a hospital in the metropolitan area pushed up the tally on the weekend.

“It is a desperate time when (the government) should make all-out efforts to stave off the spread of the coronavirus by concentrating all virus control capabilities and administrative power,” Moon said in an emergency anti-coronavirus meeting, which he presided over for the first time in about 10 months.

“If we can’t stop the spread of the virus, we have to consider raising the social distancing scheme to Level 3,” he said.

Authorities raised social distancing measures to Level 2.5, the second highest under the five-tier system, in the Seoul metropolitan area earlier this week, but it has failed to slow the virus.

Acting Seoul Mayor Seo Jeong-hyup presided over a separate COVID-19 meeting later Sunday and reported an additional 170 coronavirus cases in the city during the 17 hours up to 5 p.m. That number will be included in the nationwide tally announced Monday.

“We have entered a dangerous tunnel that we’ve never experienced before,” he said at the meeting, vowing to do everything he can to secure more hospital beds.

Moon stressed the importance of widespread testing and prompt investigations of transmission routes to detect patients at an early stage and break the chain of infection.

The government earlier said it plans to set up temporary testing centers at 150 places in highly populated areas, and expand drive-thru and walk-through virus test facilities.

According to the KDCA, authorities were still investigating transmission routes of over 2,000 patients, which accounts for 22.3 percent of new cases confirmed this month. 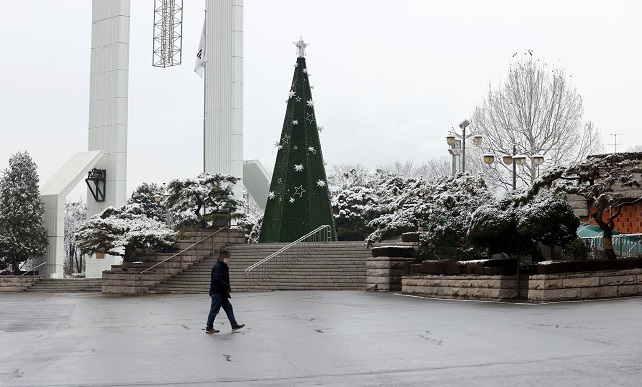 Health authorities said the current level of infections is feared to continue for a while in the winter season, urging citizens to stay home and cancel all year-end gatherings.

Calls have risen for the toughest social distancing level to cope with the outbreak, but officials have remained cautious due to its broad impact on the domestic economy.

Authorities can adopt Level 3 when locally transmitted cases surge to 800 to 1,000 or the daily tally doubles from the previous day.

The average daily cases over the past week stood at 662, falling below the requirement.

Level 3 social distancing is less stringent than the lockdown measures adopted in the United States and Europe, but it is aimed at effectively minimizing social and business activities in a wide range of areas.

The toughest virus restrictions ban gatherings of 10 people or more, including all sporting events, while schools can only offer online classes.

People are advised to stay at home as much as possible, and companies are required to have nonessential employees work from home.

As part of its antivirus campaign, the Seoul Metropolitan Office of Education said Sunday it will require elementary schools and kindergartens in the capital to offer only online classes until the end of this year.

Currently, 62 hospital beds are available for critically ill patients nationwide, while only 13 were available in the wider Seoul area, the KDCA said.

The number of patients waiting for hospitalization and treatment centers in the Seoul metropolitan area stood at 580, adding 65 over the previous day, it noted.

To address the shortage of hospital beds, Gyeonggi Province Gov. Lee Jae-myung said Sunday that he will seek an emergency measure to use a private university dormitory to accommodate new coronavirus patients.

The greater Seoul area — home to half of the country’s 51 million population — accounted for most of the cases.

The capital city of Seoul registered 399 new cases, while surrounding Gyeonggi Province and Incheon, west of Seoul, had 331 and 62, respectively.

Among the confirmed cases, 28 were imported from abroad.

The number of seriously or critically ill COVID-19 patients came to 179.

The number of people released from quarantine after making full recoveries came to 321, raising the total to 31,814.