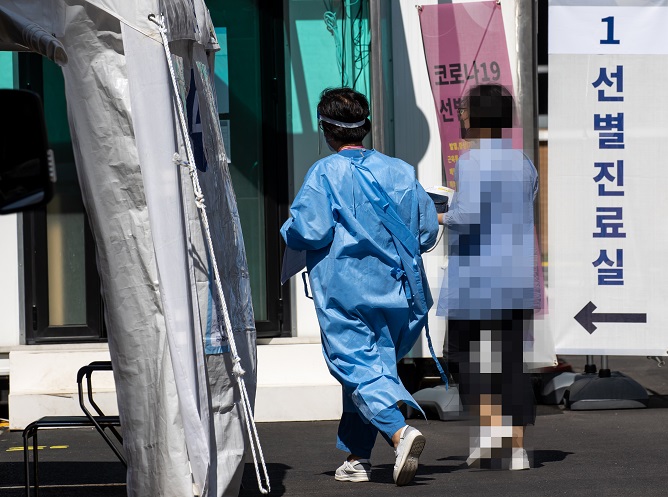 A medical worker helps a woman at the National Medical Center in Seoul on Sept. 27, 2020. (Yonhap)

SEOUL, Sept. 27 (Korea Bizwire) — South Korea reported 95 more cases of the new coronavirus Sunday, staying below 100 for the second straight day but up 34 from a day earlier, as health authorities remain on high alert on possible mass infections during the upcoming Chuseok holiday.

The new COVID-19 cases break down to 73 local infections and 22 imported cases, and brought the country’s total caseload to 23,611, according to the Korea Disease Control and Prevention Agency (KDCA).

The number of daily coronavirus cases bounced back to over 100 Wednesday and stayed above the mark Thursday and Friday.

The number fell to 61 on Saturday as health authorities focus on reducing further sporadic cluster infections and untraceable cases in the greater Seoul area.

New virus cases had been in the triple digits for more than a month since Aug. 14 due to cases tied to a church in Seoul and an anti-government rally before briefly falling below 100.

The number of imported cases stood at 22 as of midnight, bringing the total cases from overseas to 3,183.

Of the newly confirmed overseas cases, 18 came from Asian countries except for China, followed by three from Europe and one from Africa, the KDCA said.

Untraceable cases accounted for about 25 percent of the daily new cases, according to the KDCA.

The Seoul city government said it will allow public outdoor sports and cultural facilities to partially resume operations from Sept. 28 to Oct. 11 when the Korean version of Thanksgiving holiday and the Hangeul, or Korean alphabet, proclamation day fall on Wednesday to next Sunday and Oct. 9, respectively.

To stem the spread of the virus, those facilities are required to sharply reduce the number of customers through advance reservation, the city government said, adding all rallies are banned on National Foundation Day on Oct. 3 and Hangeul Day on Oct. 9.

Sohn Young-rae, a senior official at the health ministry, told reporters that the government will make utmost efforts to bring the spread of the virus under control during the two-week period.

Health authorities have said the local medical system can bring the outbreak under control if daily new infections stay below 100.

The government will make a decision on whether to adjust social distancing rules after the Chuseok holiday if the virus is under control, Sohn said. 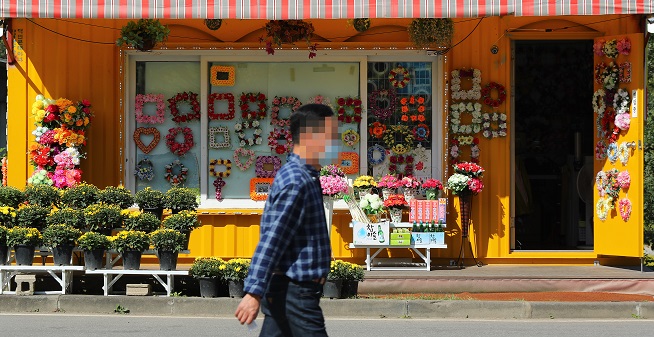 A man passes by a flower shop near a graveyard in Paju, just north of Seoul, on Sept. 27, 2020, with the number of visitors to their ancestral graves sharply down this year compared with a year earlier amid the COVID-19 pandemic. (Yonhap)

Two additional deaths were reported, raising the toll to 401. The fatality rate came to 1.7 percent.

Imported cases nearly doubled to 22 from Saturday’s 12. Of the total, six cases were from Uzbekistan, followed by five each from the Philippines and India, and one each from Nepal, Russia, Ukraine, Poland, Britain and the United States, the KDCA said

The number of seriously or critically ill COVID-19 patients stood at 124 as of midnight, up two from the previous day, according to the authorities.

The total number of people released from quarantine after making full recoveries stood at 21,248, up 82 from the previous day.

The biggest, imminent challenge is to prevent a potential rebound in new virus cases around the Chuseok holiday, which traditionally entails mass movements of people and family gatherings across the country.

This year’s fall harvest holiday runs from Wednesday through next Sunday.

With a goal to minimize the potential impacts of the holiday, the government decided to designate a special two-week period for strong antivirus efforts starting Monday, while maintaining the Level 2 social distancing guidance.

Under the two-week campaign, the operation of 11 types of “high-risk” facilities, including clubs, bars and buffets, will be suspended in the greater Seoul area for two weeks.

As for non-metropolitan areas, five kinds of risk-prone facilities, such as nightlife establishments will be ordered to shut down for a week.

The authorities also called for the strengthening of quarantine measures further at public facilities, such as restaurants, cafes and theaters, in Seoul and the surrounding areas during the period.

The pandemic, which started in China late last year, has killed more than 994,000 people worldwide and infected nearly 33 million as of Sunday, a tally from Johns Hopkins University showed.