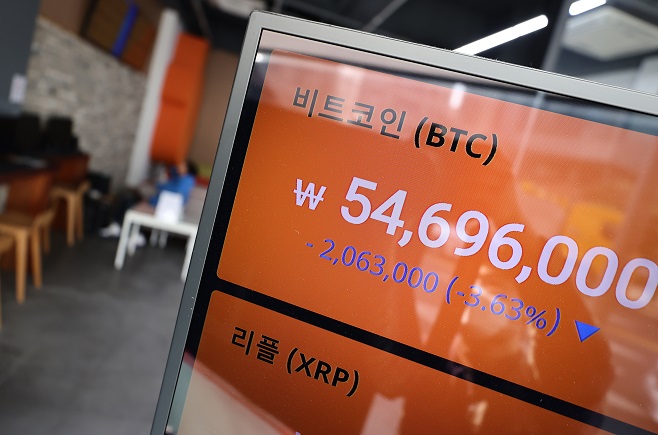 An electronic signboard at the cryptocurrency exchange Bithumb in Seoul on March 5, 2021, shows the price of the digital currency bitcoin having fallen to 54,720,000 won (around US$48,381) per unit. (Yonhap)

SEOUL, March 9 (Korea Bizwire) — The average daily transaction amount of cryptocurrencies is skyrocketing on the back of rising investment fever.

The combined transaction amount of the nation’s four major cryptocurrency exchanges totaled 445 trillion won (US$389 billion) during the period from Jan. 1 to Feb. 25, far exceeding last year’s yearly total of 356.2 trillion won, according to data from the Financial Services Commission.

The four major cryptocurrency exchanges saw the number of users who had traded cryptocurrencies more than once over the past two and a half months reach 1.6 million including redundant members.

At present, the country does not recognize cryptocurrency as a financial product nor a currency, although cryptocurrency business operators are obliged to prevent money laundering practices.

In other words, unlike stocks, derivatives and peer-to-peer (P2P) lending, cryptocurrencies remain out of institutional settings.

Although the country will implement a 20 percent tax on Bitcoin and cryptocurrency profits starting from next year, such profits are set to be classified as other income like lottery prizes rather than financial income.