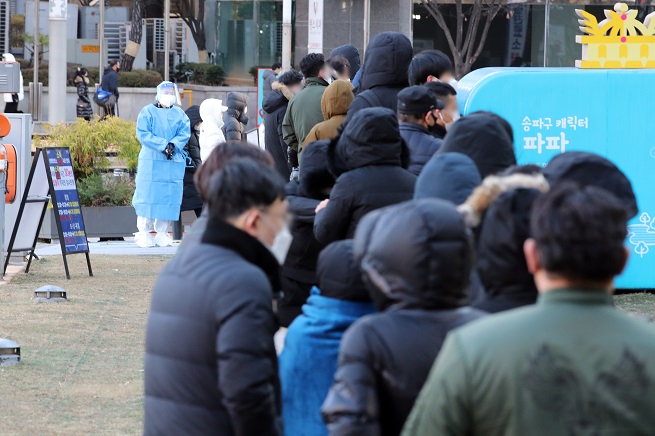 People stand in line to receive coronavirus tests at a screening clinic in Seoul’s Songpa Ward on Dec. 1, 2021. (Yonhap)

SEOUL, Dec. 1 (Korea Bizwire) — The state of urgency surrounding the pandemic in South Korea escalated to a new high Wednesday, as new coronavirus cases topped 5,000 for the first time while health authorities confirmed the first omicron variant infections in the country.

The country reported 5,123 new COVID-19 cases, including 5,075 local infections, raising the total caseload to 452,350, according to the Korea Disease Control and Prevention Agency (KDCA). The country’s previous highest daily number of cases was 4,115 last Wednesday

South Korea added 34 more deaths from COVID-19 on Wednesday, raising the death toll to 3,658. The fatality rate stood at 0.81 percent, up from 0.78 percent reported a month earlier.

As of 9 p.m., 4,317 new cases had been confirmed across the country, up 460 from the previous day, according to local governments and health authorities. Cases are counted until midnight and announced the following morning.

A married couple living in Incheon, west of Seoul, and their friend — all in their 40s — have tested positive for the omicron variant in genetic sequencing tests, the Korea Disease Control and Prevention Agency (KDCA) said.

Two other people have also tested positive, the KDCA later added, putting the total confirmed at five. At least one more suspected case was being tested for the variant.

Health officials also tested the couple’s teenage son, and the result will be announced later this week.

The emerging omicron variant across the globe has put South Korea on high alert. On Tuesday, the first suspected case of the omicron variant was detected in the country, but health authorities said further tests were required.

The KDCA said the results of the genetic sequencing tests will be released later in the day.

None of the four people who are suspected to have been infected with the omicron variant have shown any significant symptoms.

The authorities also said they are mulling over whether to do genetic sequencing tests on all entrants from overseas. 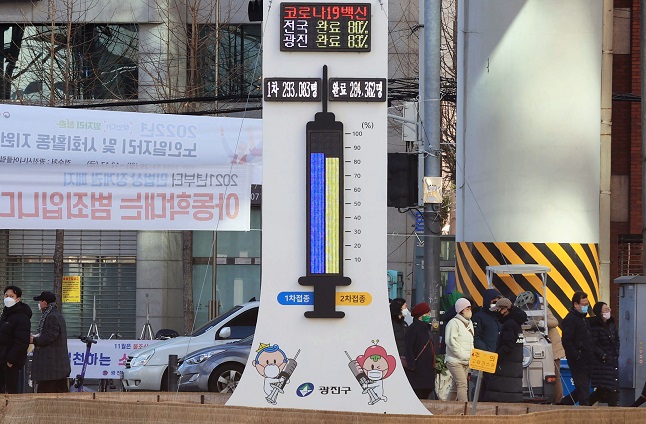 A pedestrian walks by an electric board in Seoul on Dec. 1, 2021, saying that 80 percent of the country’s population has been fully vaccinated. (Yonhap)

Meanwhile, a Namibian diplomat, who arrived in Japan on Sunday, was confirmed to have been infected with the variant.

The diplomat was on board a plane that left Adis Ababa and made a stopover at Incheon International Airport, South Korea’s main gateway, before arriving at Narita airport near Tokyo, according to Japanese media reports and airline industry officials.

Earlier in the day, Interior Minister Jeon Hae-cheol told a pan-government meeting on the virus response that the government is mulling over additional measures after the government decided to halt the further easing of social distancing rules

The minister also said the authorities will come up with measures to secure more hospital beds, at least an additional 1,300 by the middle of this month.

As of late Tuesday, bed capacity in the greater Seoul area for critically ill patients came to 89.2 percent, adding to strains on the country’s health care system.

The KDCA earlier said the pandemic risk level, a new five-tier assessment system introduced last week to evaluate the degree of COVID-19 risk, has reached the highest level in the country’s capital area.

Health officials said it has become impossible to move on to the second phase of the country’s “living with COVID-19″ scheme that began early this month for a gradual return to normal life.

South Korea had originally planned to further relax the virus curbs in mid-December after four weeks of the first phase.

A total of 41.08 million people, or over 80 percent of the country’s population, have been fully vaccinated as of Wednesday, the KDCA said.

About 3.22 million people have received a booster shot, according to the KDCA.