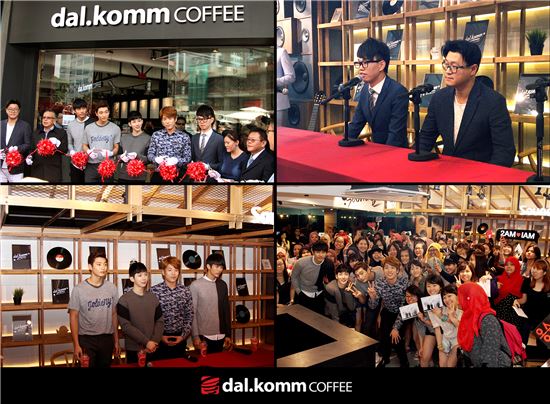 Dal.komm COFFEE provides not only coffee itself but also a chance to interact with Korean pop culture and music. (image: dal.komm COFFEE)

SEOUL, Dec. 3 (Korea Bizwire) – Dal.komm COFFEE recently held an opening ceremony for its fourth Malaysian branch, in Damansara Uptown. In celebration of the launch, Korean boy group 2AM had an autograph event at the new store in the presence of CEO Choi Byung-wu and members of its partner Dellmax Holdings.

The opening event has generated considerable attention from Malaysian media and 2AM fans. It consisted of an opening ceremony, the autograph event, a photo shoot, and an interview with the singers.

“Dal.komm COFFEE provides not only coffee itself but also a chance to interact with Korean pop culture and music. This is the place where Malaysian people can have a cup of coffee while watching entertainment content and listening to music. It plays a role as a cultural complex,” Choi said. “We invited 2AM to our ceremony to show that we are different from other coffee franchises, who just offer coffee without any cultural content.”

In order to strengthen its image as a cultural place, the company plans to hold music performances called Veranda Live Concerts at the store. The Korean coffee brand has periodically held concerts in South Korea, in which a popular singer visits one of the stores to sing his or her songs for fans. Some Korean singers popular in the country, as well as renowned Malaysian singers, will give performances at stores in Malaysia.

In addition, the company plans to introduce its Honey Mong and Berry Cube beverages, beloved among Koreans, which are exclusive to dal.komm COFFEE stores. It is also set to develop localized beverages to add to the menu.

The coffee chain has already opened three stores in Malaysia: The Damansara store in Kuala Lumpur, the IOI City Mall store in Putrajaya, and the D’Pulze shopping mall store in Cyberjaya. It also plans to enter the Chinese and other Southeast Asian markets.