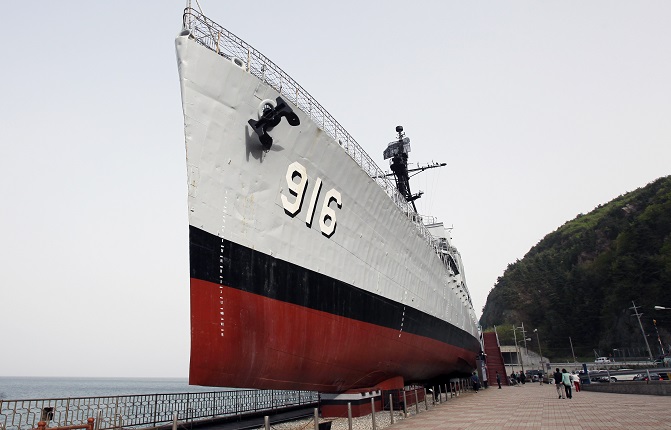 GANGNEUNG, March 25 (Korea Bizwire) — A decommissioned naval vessel, once a prized resource for tourism that local authorities competed over, will be returned to the South Korean Navy.

The city of Gangneung in Gangwon Province recently notified the Navy that ROKS Jeonbuk, a decommissioned naval destroyer currently displayed in Gangneung Unification Park as part of an exhibition, will be returned.

ROKS Jeonbuk is a 3,471 ton destroyer built in 1944 in the U.S. Since 1999, the ship has been leased to Gangneung rent-free to help with the city’s effort to turn the park into a landmark security-themed tourist destination.

However, with the vessel turning 76 years old, its aging structure and rising safety concerns have led the city to spend 300 million won (US$264,500) each year for maintenance.

Decommissioned ships were once a valuable tourism resource coveted by regional authorities.

So far, the Navy has leased 12 decommissioned ships to nine regional authorities, including the ROKS Jeonbuk in 1999.

Now, as fewer tourists are interested in visiting military facilities, coupled with the impact of the coronavirus pandemic, regional authorities are seeing a dwindling number of school trips and other tourist groups coming to see the vessels.

ROKS Suyeong was also built in the U.S. in 1944. The ship participated in Operation Iceberg, also known as the Battle of Okinawa, during World War II. The ship was decommissioned in 2005.